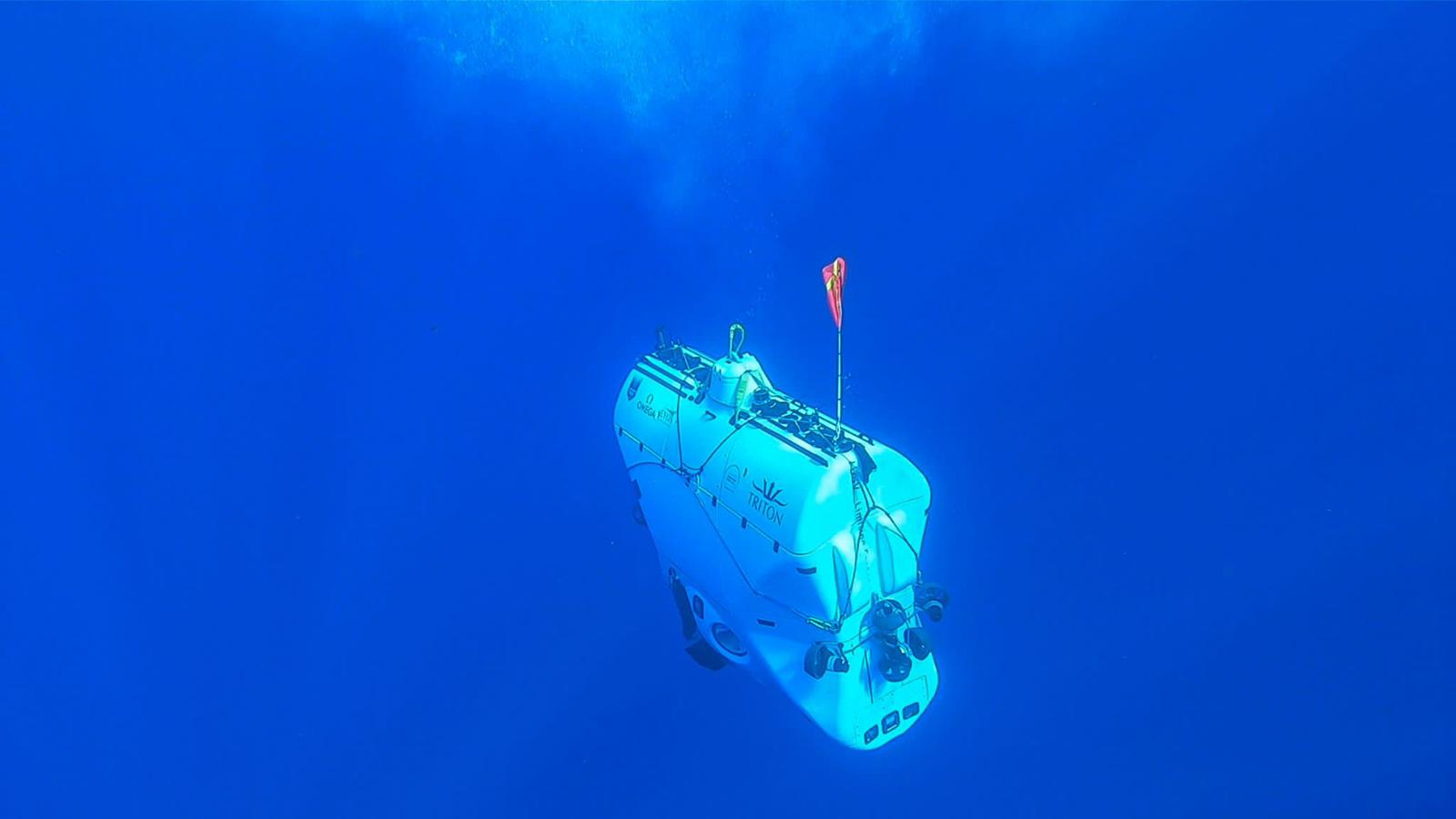 This expedition is a joint mission between Minderoo-UWA Deep-Sea Research Centre and Caladan Oceanic. The expedition has been supported by Minderoo Foundation’s Flourishing Ocean initiative as part of its commitment to increase knowledge of the deep-sea in terms of biodiversity, ocean processes such as currents and circulation, and human impacts, including climate change.

The Minderoo-UWA Deep-Sea Research Centre and Caladan Oceanic are embarking on a 25 day voyage the DSSV Pressure Drop to explore, sample and map key seabed features of the East Indian Ocean at abyssal and hadal depths (3000 – 7000 metres deep).

The expedition will see the new world-class two-person full ocean depth submersible, DSV Limiting Factor, deployed 10 times in at sites across the Eastern Indian Ocean, alongside deployments of three full ocean depth lander vehicles that will observe and monitor deep sea life and the environment. The ship’s multibeam echosounder will produce some of the most high-resolution charts of the sea floor ever obtained in this little-mapped area.

The expedition is expected to map over 20,000 square kilometres of seafloor, collect hydrographic data, and acquire over 250 hours of HD video footage of deep-sea fauna and habitat from some of the deepest and most complex sea-floor structures in the Indian Ocean. When combined, these data will set the backdrop to about the region’s deep-sea habitats and environments that will help us interpret the results of the first biodiversity and biomass surveys of the East Indian Ocean at such great depths.

Approximately 2100 km south of the Java Trench and 1300 km north of the Diamantina Fracture Zone, the WZFZ is part of the larger Wharton Basin and Perth Basin complex and spans an area of 13,000 square kilometres. It formed as a transform fault, some 130-124 million years ago, with the opening of the Indian Ocean during the breakup of the Greater India and Australia landmasses along the northwest-southeast trending fracture zone. Extending south from the Zenith Plateau, the WZFZ consists of five prominent features with two deep troughs accounting for 32% of the total area. A recent survey mapped the WZFZ and found the deepest point to be 6625 m with nearly 2800 square kilometres of the WZFZ being deeper than 6000 m.

We found three distinct seascapes and communities at the WZFZ – deep soft sediment environment at the centre of the fracture zone, slopes on either side of the fracture zone with loose rock and mineral deposits, and extinct smooth, layered larval flows at the top of top of the slopes. 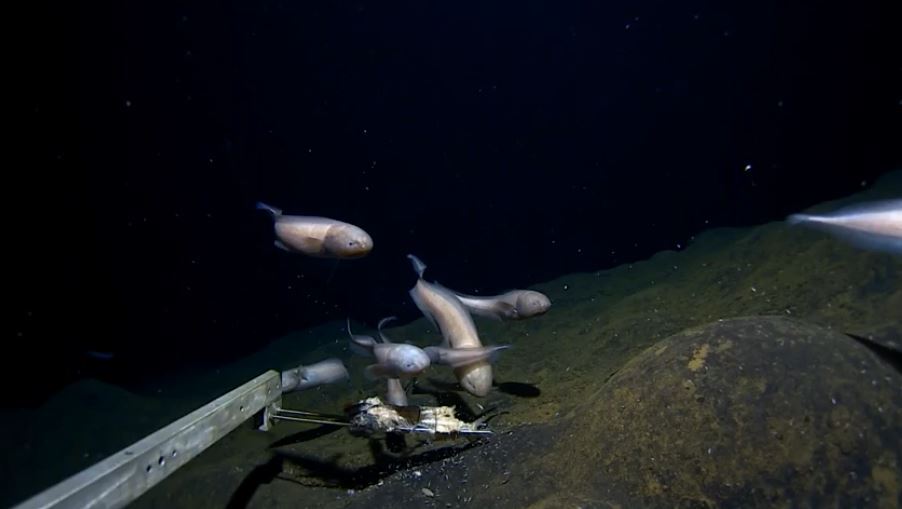 The slope of the fracture zone was geologically complex and diverse much like its fauna. We recorded stalked sponges, anemones, polychaete worms, and sea cucumbers from the submarine and recorded at least three species of shrimps on the landers. Like the basin of the fracture zone, cusk eels (Bassozetus spp.) were abundant on video footage collected using the landers. We also recorded several fish that are not described. 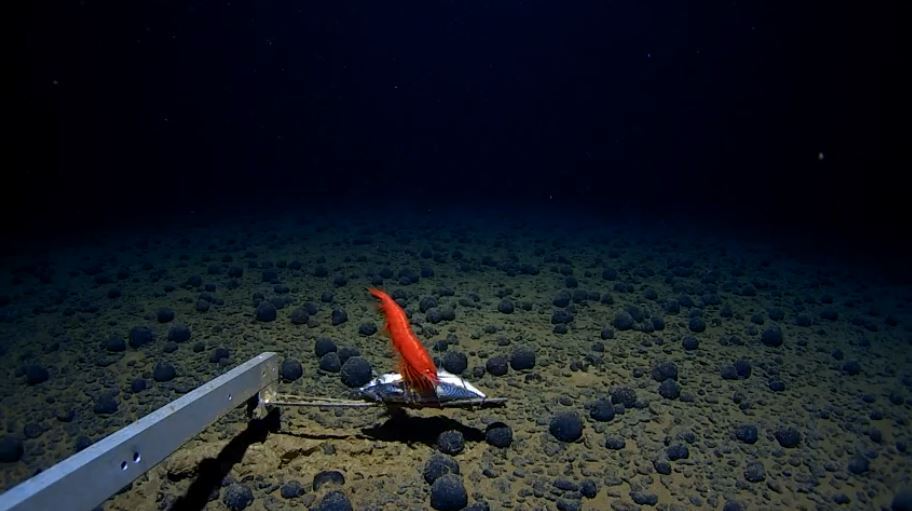 The top of the fracture zone – north and south – are extinct volcanoes with extensive larva flows, slabs of rock and steep inclines and walls. Here, fauna was characterised by different species of stalked glass sponges and feather stars, deepwater bamboo coral, and fish species more often recorded in bathyal depths. 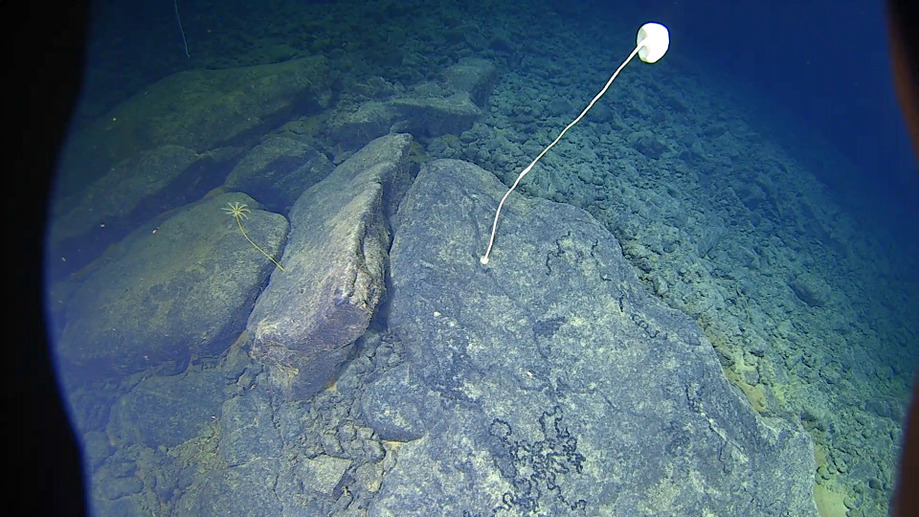 ~25.1˚S / 107.6˚E
Northeast and parallel to the LDR is the 576km long Wallaby-Cuvier Escarpment, some 620 km south east of the WZFZ. This escarpment largely comprises stepped terraces at ~3600m, 5100m and 5600m, with near vertical faces between each terrace. The base of the escarpment extends down into the northern sector of the Perth Basin, a flat abyssal plain extending at a a relatively uniform 4800m to meet the fluvial fan at the end of the Perth Canyon.  Steep, near vertical faces are unusual in the deep sea and may host equally unusual animals.

Two submarine dives and six lander deployments were undertaken at the WCE. Five landers deployments between 4200-5600 m water depth and one at 3000 m water depth filmed several species not seen at WZFZ. Rattails (Macrouridae spp.), at least two species of cusk eel (Bassozetus spp.), shrimp, and many large, feeding amphipods were identified on lander video footage which provided the first underwater video footage of these animals at this location. The first submarine dive traversed the steep lower slope of the escarpment between the lower and middle terraces. The lower terrace consisted of fine, chalky white sediment with occasional boulders that hosted crinoids (featherstars) and other filter-feeding invertebrates. Glass sponges attached themselves to loose rock and sediment at the base of the slope and persisted in abundance as the slope steepened and turned to rocky outcrops. 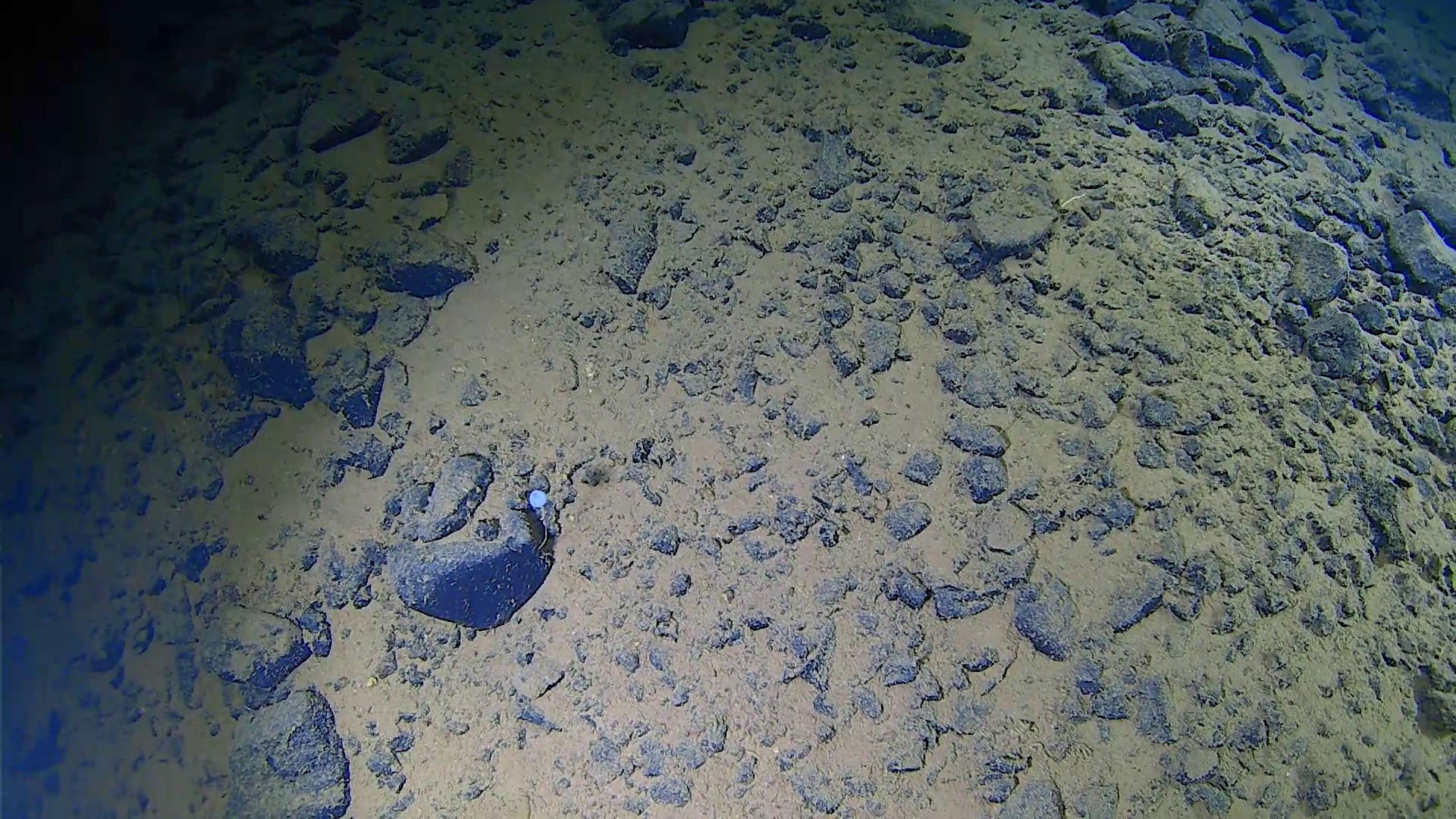 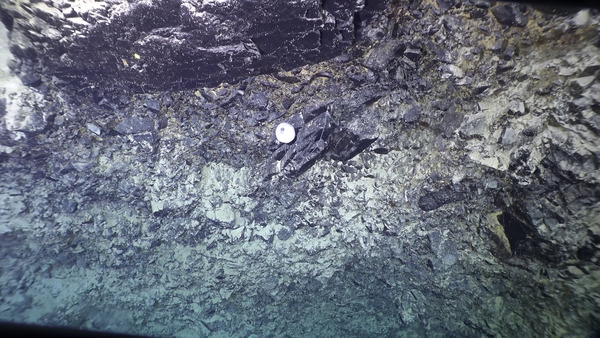 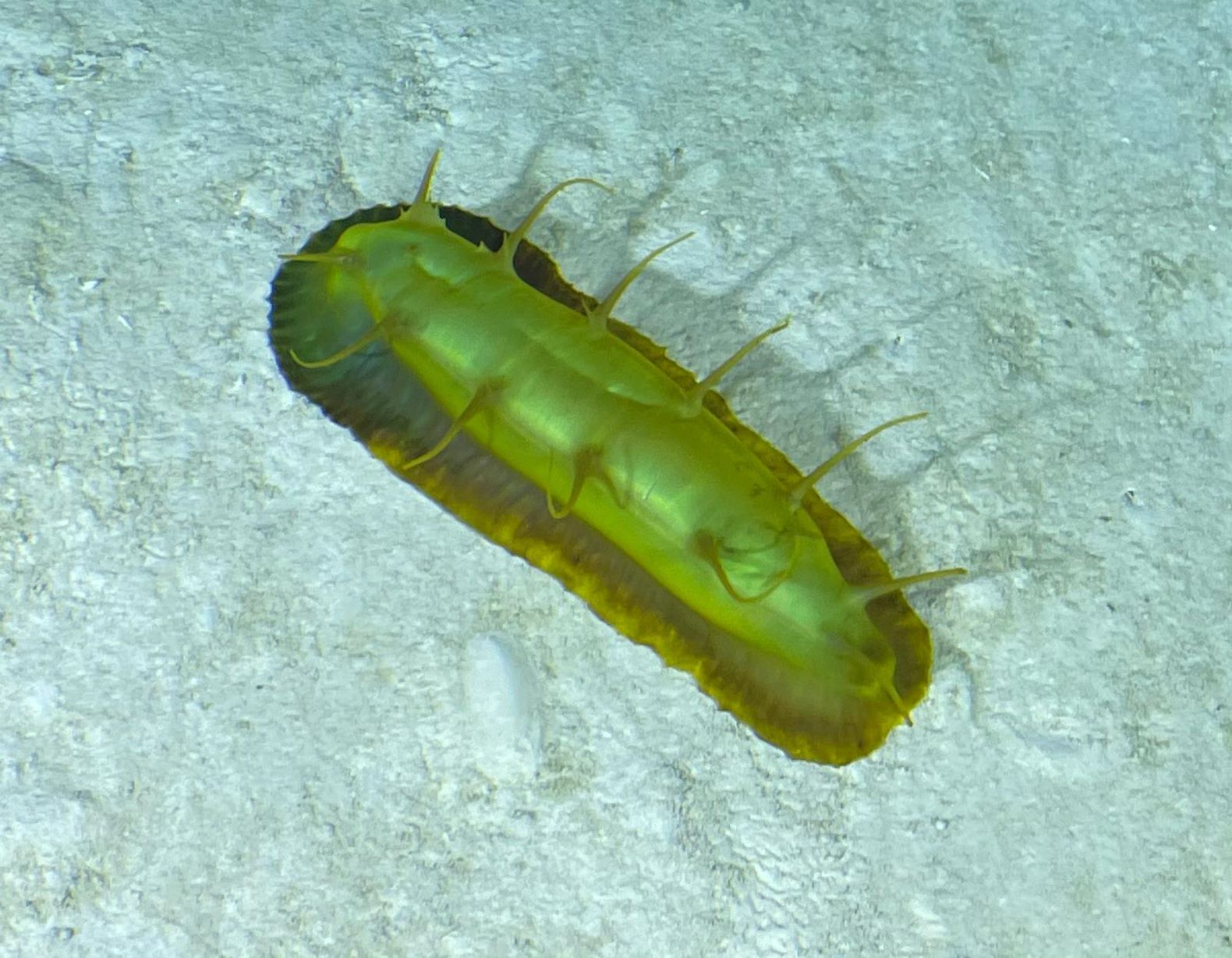 The Perth Canyon was formed by the ancient Swan River that flows through Perth. Cascading down the edge of the continental slope, the river outflow carved out the canyon many millions of years ago. Today it remains unseen and largely unknown, despite being only some 20 km west of Rottnest Island and being some 1.5 km deep and 15 km across – similar in size to the Grand Canyon. The shape of the canyon ducts cold water in the Leeuwin Undercurrent into the canyon increasing nutrients in the surface waters, feeding phytoplankton that support a huge variety of marine life from the surface to the sea floor.

Two baited landers were deployed at the head of Perth Canyon and within the Perth Canyon Marine Park. Both landers were in 1000 m water depth. These relatively shallow deployments recorded high abundance of crustaceans (crabs) and fish compared to those at WZFZ and WCE and also recorded a small shark. One crab was so large it shifted the lander while it fed on the bait. Crystal crabs (Chaceon albus) were present at both landers. This species is common along the Coast of Western Australia and is fished commercially between Fremantle and the North West Cape.

Our research at Perth Canyon was impacted by rough seas and limited our work to the shallow waters at the head of the canyon. Unfortunately, the DSV Limiting Factor could not launch safely in this weather, but we look forward to future dives in Perth Canyon Marine Park should the opportunity arise.

The scientific crew for the expedition comprises scientists from UWA,  the WA Museum and the Smithsonian Institute in the US. Professor Alan Jamieson is a biologist, engineer, adventurer, explorer, and author. He has worked in the deep-sea for over 21 years and has had a significant impact on the field in this time. He has published over 120 scientific papers, has been involved in over 70 deep-sea expeditions, and has conducted research in every one of the world’s oceans. His work has also featured in the BBC’s Blue Planet II, and NHK’s Deep Ocean, Descent into the Mariana Trench documentaries.

Alan joins the School of Biological Sciences and Oceans Institute as the Founding Director of the new Minderoo-UWA Deep-Sea Research Centre.

This expedition was conceived by Alan who subsequently served as Chief Scientist, expedition leader, and completed 6 of the 8 submersible dives in the East Indian Ocean. His main role was liaising between the ship's Captain, crew, scientific party and submersible team to ensure effective operations that met the scientific goals.

Associate Professor Jan Hemmi is an international expert in vision research at the University of Western Australia. He is a neuroscientist focused on the relationship between sensory processing and animal behaviour with collaborations across the world. He has co-authored over 80 peer-reviewed publications and written five book chapters, with over 2700 citations. He is an expert in automated video analysis of animal behaviour and has pioneered new methods to describe what animals can see, which is particularly relevant to the deep sea.

Jan joined the ship to explore the function and evolution of vision in midwater invertebrates. He used optical, physiological and behavioural tests on board the DSSV Pressure Drop to measure and describe the visual capabilities of pelagic hyperiid amphipods. Hyperiids are a group of small midwater amphipods famous for their extreme eye designs. Their eyes, which can be as big as a third of their body size, are likely a response to the challenging visual and behavioural conditions in the top 1000m of the oceanic water column. Understanding how these tiny animals with their minute brains use their visual specialisations in order to survive the challenges of the deep ocean will help us understand visual information processing in this poorly explored and largest habitat on earth. Such knowledge can be then applied to development of autonomous sensors and other technology.

Dr Todd Bond is a marine ecologist at The University of Western Australia who focuses on fish and shark ecology. He is an international expert in fish ecology research around artificial structures including oil and gas installations and his work informs sensible approaches to decommissioning. His research extends from coastal waters to bathyal depths and he collaborates globally. Dr Bond’s research has been awarded at international conferences and saw him receive a Premier’s Science Award in 2020. He is a WA Science Ambassador and strives to engage young scientists with relatable, interesting, big picture science.

Dr Bond is a Research Coordinator in the MUDSRC and responsible for voyage logistics, project management, and collection of video imagery from baited landers and DSV Limiting Factor. Dr Bond has in-depth knowledge of marine fishes and macro invertebrates and interrogates video footage to understand the ecology between and within sites surveyed using landers and the DSV Limiting Factor. These data provide the first comprehensive description of deep-sea fauna at the Wallaby-Zenith Fracture Zone and Wallaby-Cuvier Escarpment.

Dr Karen Osborn is one of the world’s leading midwater biologists. She is curator in charge of seven collections at the Smithsonian’s National Museum of Natural History and holds an adjunct Scientist position at the Monterey Bay Aquarium Research Institute. Dr Osborn is an expert in the systematics, functional anatomy, and behaviour of open ocean animals.  She coordinates deep-sea research projects with a diverse group of collaborators around the world, working off Antarctica, Mexico, Cape Verde, and both US coasts. Dr Osborn has co-authored over 35 publications and has described and named seven new genera and at least 15 new species of deep-sea animals. She regularly engages in outreach and exhibits to highlight deep sea research to the wider community.

Anna-Lee Jessop is in her final year of her PhD program studying the visual ecology of semi-terrestrial and mid-water crustaceans. Throughout her PhD Anna-Lee has developed world-class skills in anatomical imaging, electrophysiology, computational modelling, data analytics and science communication. Anna-Lee will take a Smithsonian Institute Postdoctoral Fellowship in mid-2021 and continue her work alongside Dr Hemmi and Dr Osborn investigating the visual ecology of mid-water invertebrates.

On board, Anna-Lee assisted Prof Jamieson, Dr Hemmi and Dr Osborn with sample collection, curation and preservation of mid-water and hadal invertebrates. She also assisted with on-board experimental procedures and pre-voyage logistics. Over the next few months, Anna-Lee will collect high resolution anatomical images of the persevered samples which will be used to investigate aspects of their visual ecology. The voyage was an excellent opportunity for Anna-Lee to gain experience in deep ocean sampling techniques, both in animal collection and video sampling.

Paige Maroni is a PhD student at the University of Western Australia and studies the incredible diversification, evolution and chemical ecology of a marine mollusc using phylogenomics. The Southern Ocean benthic sea slug, Doris kerguelenensis, was originally described to be a single species, however through mitochondrial DNA sequencing, her PhD has revealed a multitude of highly divergent lineages within that species, representing a species flock comprising over 50 species. Paige will use a transcriptome-based exon capture approach to resolve this Antarctic radiation and map the evolution of these animals’ metabolomes throughout this new phylogeny. Paige has a deep appreciation and interest in marine invertebrates and rich experience in taxonomic field studies. Additionally, Paige has been awarded the UWA Oceans Institute Robson and Robertson award, a UWA Convocation award, and an Antarctic Science Foundation award.