A graduate from The University of Western Australia’s Conservatorium of Music has won a major prize for composing at the prestigious Art Music Awards in Melbourne.

Olivia Davies, who graduated with First Class Honours (Music Composition) in 2018, was awarded Work of the Year: Large Ensemble at the Australasian Performing Right Association event for her orchestral piece Stratus.

The judges said it was a standout achievement for the composer’s first commission for a large orchestra.

Ms Davies said she was grateful for the award and the people who’d supported her.

“It’s particularly special to have your hard work recognised by your peers,” Ms Davies said. 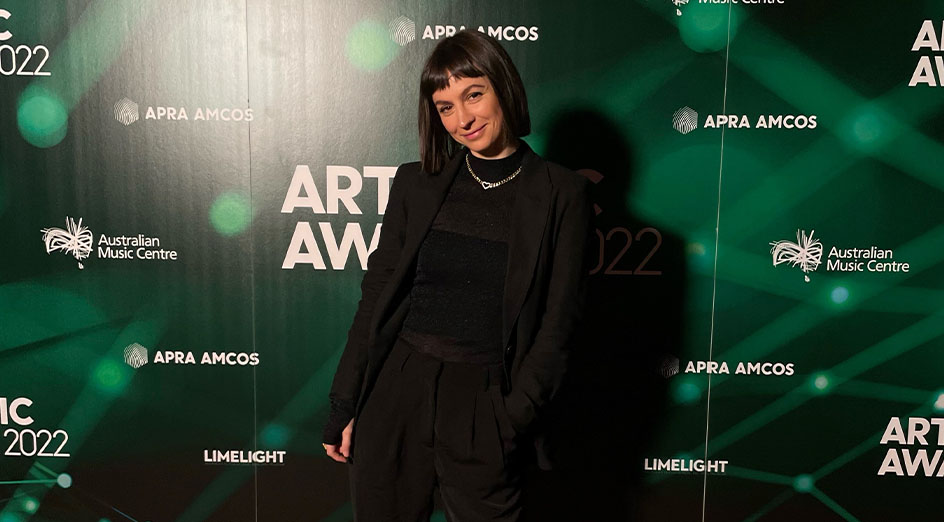 She said the work began with the concept of a ‘sound mass’.

“Stratus comes from the Latin prefix ‘strato’ meaning ‘layer’ and is the name for a low and continuous cloud formation; the kind we see on an overcast day,” she said.

“It was this idea of ‘layer’ that inspired the form of the work where individual lines of sound slowly emerge, accumulate and transform into a clearer musical scene that ultimately expands and descends into a dense mass of sound.”

Stratus was premiered by the West Australian Symphony Orchestra and conductor Asher Fisch.

Ms Davies, who is currently the Composer in Residence at WASO, said she loved the challenge of composing and started at a young age out of curiosity and a sense of fun.

“There wasn’t really a specific time or moment where I made the decision to start composing,” she said.

“It has always been a part of my musical practice, starting when I was a kid and meant to be practicing. I never really shared it though, it was purely just for fun.

“When I decided that I wanted to study composition, I’d reached a point where I just wanted to learn the craft and see how good I could get at something that I really enjoyed doing.”

The Art Music Awards are presented by APRA and the Australian Music Centre to recognise achievement in the composition, performance, education and presentation of Australian music.

Ms Davies, who trained classically in piano and flute, said she had found a lot of support for new music in Australia.

“We can certainly support new music and new voices whilst also celebrating the classics,” she said.

Ms Davies said her UWA degree had opened doors for her in the industry.

“I was given opportunities that I otherwise wouldn’t have had or known about and these experiences really helped me learn and get a sense of what a musical career could look like,” she said.

The Chair of Composition at UWA’s Conservatorium Dr James Ledger congratulated Ms Davies on her award.

“This is Olivia’s first piece as part of her residency with WASO and she has done exceedingly well to take out this award,” Dr Ledger said.