31/03/2022 | 9 mins
The name David Atkinson is synonymous with rural medicine in Western Australia’s Kimberley and the Rural Clinical School of Western Australia, and it is not hard to see why.
This dedicated professor has spent most of his working life transforming the northern rural healthcare scene and is responsible for many of the reasons the Rural Clinical School of Western Australia (RCSWA) is as successful and meaningful as it is today.
Ever the humble man and often downplaying his academic and research contributions, David is the person to thank for aiding the creation of the RCSWA, embedding rural research into healthcare services, and paving the way for additional training support for medical students.

Image: Emeritus Professor David Atkinson
In the months following David’s retirement from the RCSWA, it is important to recognise his extensive contributions to the school and applaud him for the years he has given in service.
David’s story with the RCSWA actually began in 2001, when word first circulated that new federal funding had become available for rural clinical schools – an education model that did not yet exist in WA.
The model enabled medical students to complete extended blocks of their clinical training in regional areas and allowed schools to deliver significant components of the medical curriculum in a rural setting.
The long-term goal was to encourage medical students to remain in rural areas to work and ultimately improve rural healthcare services.
Representatives from the University of Western Australia, WA Country Health Service and several motivated regional doctors came together and embarked on an extensive consultation across the state to identify gaps in local rural healthcare workforces and gauge demand for rural medical school experience.
With their funding application successful, the steering group set about establishing the first four school sites at Kalgoorlie, Geraldton, Port Hedland and Broome before welcoming the seven volunteer students in May 2002, with the pilot program running for 14 weeks.
David was nominated Medical Coordinator for Broome and Port Hedland, while Brenda Murison was appointed to Geraldton and Phil Reid to Kalgoorlie. Campbell Murdoch was secured as the founding Head of School.
David recalls the emphasis that Campbell Murdoch placed on each school site’s uniqueness, insisting that the teaching and learning experience across sites be different to reflect their unique resources and specialist visits.
He said it was important to highlight how rural medical careers were different across rural and remote areas, in comparison to the metropolitan area.

To begin with, we made the deliberate decision to go to the areas of greatest need in WA, not the places where it’s easier to get people to go. We were trying to fill gaps where there were real shortages of doctors. The city teachers didn’t really believe it was possible.

“Basically, we ran the city curriculum in the country, and there was a bit of tension in those early years. We largely followed UWA assessments and gradually diverged from there and came up with our own assessments,” David explained.
This need to fill gaps was also strengthened by the partnership David established with the Kimberley Aboriginal Medical Services (KAMS) to help fulfil their vision to ‘grow your own’ locally-trained General Practitioners.
Over the years, the RCSWA has rapidly expanded throughout regional Western Australia – to Esperance (2004), Derby and Albany (2005), Karratha (2006), Bunbury and Narrogin (2007), Busselton and Carnarvon (2009), Kununurra (2011), Northam (2014) and finally Warren Blackwood (2020).
Sarah Moore was part of the pilot student cohort, based in Kalgoorlie, and loved her experience so much she returned to the school a decade later as a Medical Coordinator. Although Sarah did not work closely with David during her RCSWA year, she was inspired by him later in her training.
“When I started my GP training, I connected with David to organise a placement in Kununurra at KAMS and he was my supervisor and mentor,” Sarah said.
“I remember him being very available and always so willing to listen and provide non-judgmental, compassionate support. He really encouraged me to think critically about how I was practicing and developing.”
Sarah believes the healthy, strong connections the medical community has established across the Kimberley region are all thanks to David. She believes his dedication to developing and maintaining a local medical workforce is a legacy that will remain for years to come.
“David has created a beautiful sense of family within the Kimberley.
“He’s all about keeping staff and colleagues supported and getting the job done… he is a role model and a lot of people who’ve trained with his guidance have embodied his attitude.
“He doesn’t want recognition, that’s not what motivates him. What motivates him is giving back to the community and teaching and mentoring doctors so they can give back to the community,” Sarah added.
The success of the original RCSWA sites in Kalgoorlie, Port Hedland, Geraldton and Broome in the early years quickly attracted the attention of other institutions.
The University of Western Australia and University of Notre Dame became official partners in the RCSWA in 2007. In more recent times the program has extended to not only include penultimate students, but final year students. Curtin University expanded the partnership into a tri-party collaboration in 2020.
Bunbury was the inaugural site for final year students in 2019, followed by Albany (2020), Broome (2021), Geraldton and Kalgoorlie (2022).
Being part of the initial startup of RCSWA and the first cross-university collaboration are not the only lasting legacies of David Atkinson – he was also responsible for pushing the creation of a rural research platform.
David said sourcing funding for research had been “an interesting ride” over the years.
“Initially, the Commonwealth said the RCSWA couldn’t spend any money on research, but then they changed their mind and it became five per cent, and then 10 per cent (budget spend),” he said.
“Once we could spend money, I asked Campbell to fund a Kimberley research fellow which resulted in getting Julia Marley onboard. We needed someone who was dedicated to research and could be on the ground.”
Working in partnership with the Kimberley Aboriginal Medical Service, Julia and a growing team of RCSWA researchers, David was steadfast on pursuing research based on regional priorities.
David’s previous work experience in Darwin, Fitzroy Crossing, Broome and other remote communities in the Kimberley crystalized in his mind the need for more research into Aboriginal health.
Studies into diabetes, kidney disease, maternal and child health as well as work with external partners on aged care, rheumatic heart disease and dental disease followed. 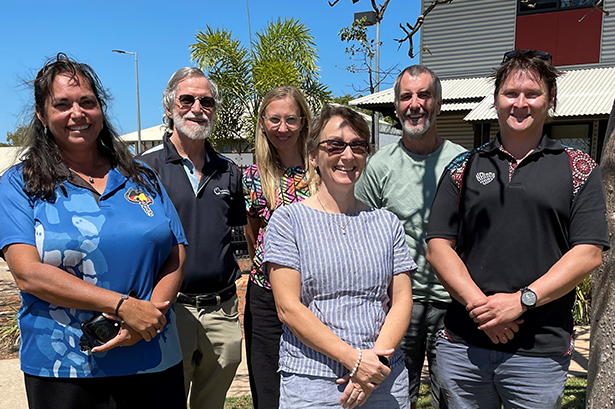 One of David and Julia’s greatest achievements was the Kimberley HbA1c study, which aimed to change local guidelines surrounding diabetes testing.
However, the study went further than the pair expected, gaining a place within the pages of The Medical Journal of Australia and contributing to the evolution of national diabetes testing guidelines.
Together, David and Julia secured funding from the RCSWA and local support from GP registrars and Aboriginal patients to test whether HbA1c testing could replace traditional glucose level testing.
The new test would be ideal for remote Aboriginal communities as it was simpler to conduct and generated more reliable results, avoiding the need for proximity to laboratories and technicians.
Julia said David had always pushed for research to be driven by the regions and to enact local change.
“He has driven processes around getting other researchers to change how they do things; to be respectful of local communities, and enact local change, not just be focused on building an academic career,” she explained.
David said their intention was to work with local people to address local needs, and develop local control.

If you build something locally, it is more likely to leave a legacy.

David has kept on building – the RCSWA’s Regional Training Hubs program exists today because of his determination and hard work. Taking over as Head of School in 2015, David jumped at the opportunity to enter a submission for Commonwealth funding for regional training hubs across the state.
From this funding, the WA Integrated Regional Training Hubs program was established in 2017 with three hubs servicing the state, Kimberley/Pilbra, Midwest/Goldfields and Great Southern/South West. The main aim of the program is to foster pathways for medical students and junior doctors to further their rural medical training and secure rural medical jobs.
Project Manager Carol Chandler, who assisted the Hubs program launch, remembers how David’s dedication to boosting the rural medical workforce drove his ambition to create the program.

The primary goals of the Hubs program are recruitment and retention of a committed rural medical workforce, and ultimately, creating a diverse range of rural medical professionals and rural generalists.
From the original Hubs team membership of David, Carol, Brian Cunningham, Angela Glen, Amanda Gee and Bec Ledingham, the team has grown to number 20 academics and eight project officers who are dedicated to crafting rural medical training pathways for students.
“It’s a lot of talking to students about medical careers and career crafting, and nudging health services to where training positions are available,” Carol explained.
“We’re trying to work around the barriers to rural medicine and advocate for our students. We feel we’ve made a difference there.”
After two decades with the school teaching, coordinating, leading, researching, publishing - David officially retired from RCSWA in December 2021.
He continues to teach RCSWA students through his position with Broome Regional Aboriginal Medical Service and indulges his research passion as an Honorary Senior Research Fellow.
Current Head of School, Andrew Kirke, congratulated David on his long and distinguished career at the RCSWA and in rural medicine.
Andrew recalled some fond memories from his own student days in 1988, when David was lecturing in social and community medicine.
“He was very passionate about the inequity in medicine and wanting to bring medicine to people who can’t access it. This has clearly been a passion throughout his career.
“More recently, I’ve been personally very grateful to David in my career and work in research. I’m new to research and he has been a fantastic support, as well as a mentor to me when I took over as Head.
"He has had a huge impact on rural doctors. Getting more young rural doctors up to the Kimberley has to be largely attributed to David’s work," Andrew said.
In reflecting on his time with the RCSWA, David described the school as a source of joy for him.
“The school has been a very important part of my life, close to half my working life,” he said.
“There’s probably about 30 former RCSWA students in Broome and surrounding areas now and seeing them become wonderful doctors has been such a reward for me.”
With more than 1,500 students having successfully completed the RCSWA program over the past two decades, David can count them as his legacy too. 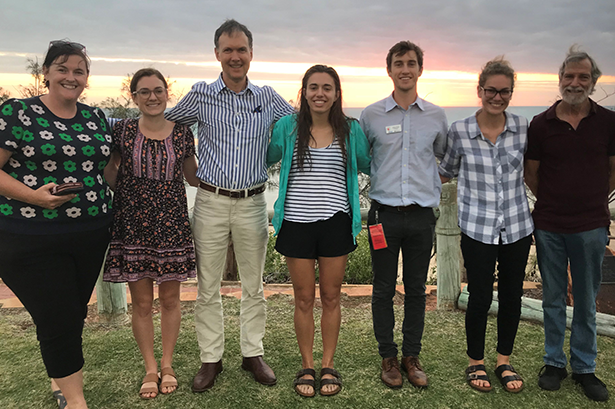