Jesse Samuel Schelfhout, 22, who has a Bachelor of Philosophy with First Class Honours in Physics and is currently completing a Master of Physics (Experimental), is UWA’s 106th Rhodes Scholar in 108 years.

Mr Schelfhout plans to undertake a DPhil in Atomic and Laser Physics at the University of Oxford, where he intends to work on cutting-edge experiments to broaden understanding of fundamental physics.

“The experiment I’m looking at working on is around atom interferometry, a maturing quantum technology that holds promise for next-generation gravitational wave detectors amongst other things,” he said. 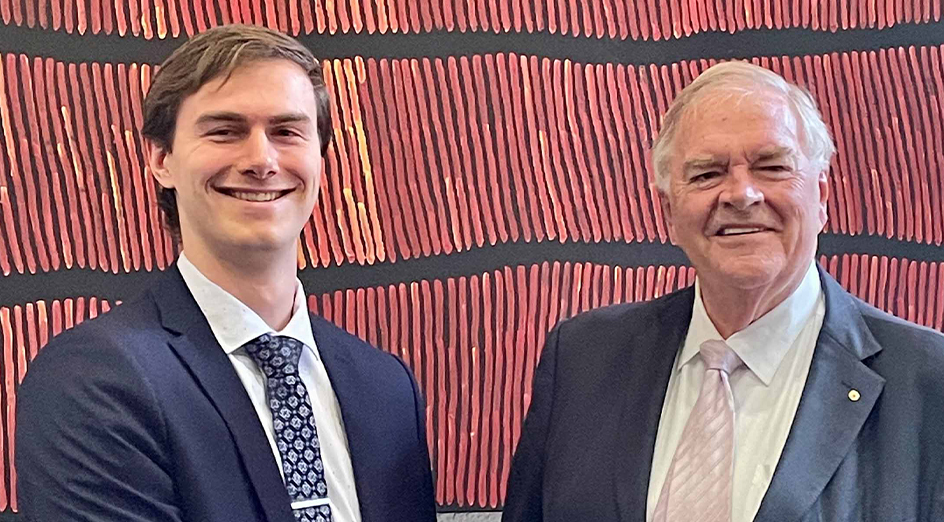 “The quantum technology industry is projected to be $4 billion in Australia by 2040 and impacts in areas such as defence and cyber security, mining, healthcare and the biomedical industry.”

A resident of St Catherine’s College, Mr Schelfhout is also an accomplished euphonium player and state open medallist in javelin, who intends to vie for a place in the 2028 Australian Olympic team.

The Honourable Kim Beazley AC, Governor of Western Australia, who presented Mr Schelfhout with the award, said he exemplified the values of a Rhodes Scholar and was “in for a great few years”.

“I was glad not to be on the selection committee this year as I am told it was an incredibly difficult choice between some exceptional candidates,” the Governor said.

“I’m very proud in a small way to be associated with Jesse today – he has some amazing intellectual challenges ahead and will make some great friendships and meet some great colleagues. This will rocket charge his career and he will soar.”

Mr Schelfhout, a former La Salle College student and Stoneville resident, said he was thrilled to have been given the opportunity to experience everything that Oxford had to offer.

“It’s a very profound university and a wonderful collegiate system and I’m looking forward to working alongside the Rhodes Scholar community,” he said.

The Governor announced that UWA’s Jasmine Laing, a former St Mark’s Anglican Community School student, and Cambridge student Mathew Blacker, who attended Hale School, would progress to the next round to be considered for an Australia-at-Large Scholarship.