A new international study has discovered a gene that allows the stimulation of cancer cells in a type of bone tumour that primarily affects young people during puberty.

Osteosarcoma is a relatively common cancer in adolescents and young adults that peaks at a time of life when growth hormone levels are naturally high.

“As cells create new proteins from DNA, the start or end may be changed meaning that the code is misread.” 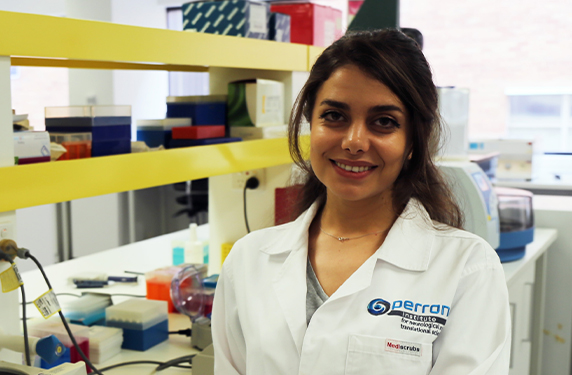 The study, published in Experimental Biology and Medicine, found that in osteosarcoma, the moderating effect of the leptin receptor, which is responsible for regulating the effects of growth hormone on cells, is impaired.

This allows the growth hormone to stimulate the cancerous cells to grow and divide without any boundaries.

Lead author Emel Rothzerg, a PhD student from UWA’s School of Biomedical Sciences, said understanding the code for this gene had led to the discovery.

“The code for each gene has a start and an end,” Ms Rothzerg said.

“As cells create new proteins from DNA, the start or end may be changed meaning that the code is misread and the protein produced may be too small, too large or the wrong shape.”

“In this case, the proteins produced are less effective and produced in smaller numbers leaving the growth hormone to stimulate the osteosarcoma and grow without moderation.”

Professor David Wood from UWA’s School of Biomedical Sciences said this study could lead to therapeutics for osteosarcoma in the future.

“Although combination therapy with surgery and chemotherapy has improved outcomes for patients, this treatment regimen has only been effective in 70 per cent of patients,” Professor Wood said.

“A better understanding of the disease process would permit earlier diagnosis and development of more effective therapies to improve patient health.”

Professor Sulev Kõks from the Perron Institute for Neurological and Translational Science and Murdoch University said the researchers could now attempt to splice, or manipulate, the gene’s code to better moderate the effects of the growth hormone.

“We hope to expand the study to determine the behaviour of the tumour when the gene’s function is fully restored,” Professor Kõks said.