It all started with two midwives arguing.

Seeing the pair of experienced professionals unable to agree on what a monitor reading meant for the wellbeing of a mother and her unborn child, graduates from The University of Western Australia Dr Arjun Kaushik, Dr Michael Challenor and their team were struck by the need for change.

“The trace on the monitor was too ambiguous to make a decision,” Dr Kaushik said. “We decided we should try to create something that was unambiguous and objective.”

The result is VitalTrace, a medical technology company geared towards the development of a device that will revolutionise labour and delivery.

"We’ve had a lot of midwives and obstetricians say this is a long time coming. They say, ‘If you get this on the market, it could change the face of obstetrics." 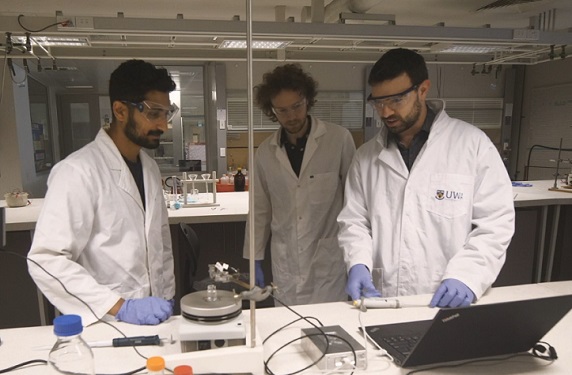 “The technology used to monitor babies hasn’t really changed much since the 1960s, when it was first introduced,” Dr Challenor said. “We saw a need to innovate in this space and create something that could have an impact globally.”

“Really we want to create a situation where all mothers can deliver safely, and all babies get the highest level of care without unnecessary intervention and missed diagnoses,” Dr Kaushik said. “The current monitoring system causes unnecessary intervention, and sometimes we even miss babies that are in distress, which can lead to horrible consequences for babies and mothers.”

“We’ve had a lot of midwives and obstetricians say this is a long time coming. They say, ‘If you get this on the market, it could change the face of obstetrics.”

Dr Kaushik completed a medical degree and a Bachelor of Arts in Philosophy concurrently and Dr Challenor has a PhD in Nanotechnology. The pair had their lightbulb moment in 2016 after being placed together in a biomedical technology design and innovation course, Perth Biodesign.

“We were put into groups of multidisciplinary teams,” Dr Kaushik said. “I was the clinician on the team, Michael was the scientist, and there were businesspeople and engineers, and we went out into the clinical sphere to find problems that were worth solving.”

With Dr Kaushik’s clinical perspective on design and Dr Challenor’s deep technical expertise informing the development of the technology itself, VitalTrace’s new device aims to provide improved detection of whether or not an unborn baby is in distress.

“Essentially it’s a very technical biosensor that gets applied to the baby during labour,” Dr Kaushik said.

“Without interfering with labour, it delivers cutting-edge information to the obstetrician and midwife. It’s very specific in diagnosing hypoxia – or a lack of oxygen in the baby – so obstetricians and midwives don’t have to wonder what’s happening, or try and guess, as occurs a little bit with the current technology.”

“We have an opportunity with our solution to change all that. What that means is we could affect not just one patient but two patients, and so early in their life that the downstream effects could be massive. A single device can echo through the lives of two patients for the rest of their lives.”

Work on the device has now progressed to trials and testing for regulatory clearance, with the team making use of UWA’s IQX co-working space for the next phase of the project.

“We’re leveraging a multidisciplinary team, both within the university but also internationally, with collaborators in Norway,” Dr Challenor said. “In-house, we have a team of scientists, mechanical engineers, electronic engineers, software developers and chemists, as well as ourselves. Abroad, we have more expertise in chemistry.”

“We’ve been lucky enough to attract some very bright, talented UWA students to work with us,” Dr Kaushik said. “And I think for them it’s been great to see what it’s like to apply the training and learning they’ve had within UWA to a real-world industry experience. So we’ve benefitted massively from that, as well as being able to tap into UWA’s wonderful resources.”

And while the primary benefits of the sensor are clear, other fields may also open up for its use. Literally.

“We’ve realised that the technology we’ve developed has a number of applications in agriculture and other areas,” Dr Kaushik said. “So we are very excited to explore those and see how many we can help out in too.”