COVID-19 highlights the risks to gender equality in Australia

On 15 October 2020, the UWA Public Policy Institute, together with Anglicare WA, had the pleasure of hosting an online event entitled ‘Quick fixes or here to stay? The COVID-19 overhaul of Australia’s social safety net’. A rich discussion with expert panellists from the non-profit sector, government and academia, the event took stock of how the government’s COVID-19 measures have reshaped its social policies and what their long-term implications might be. Read below from one of our speakers, Alison Preston, who underscores the particularly vulnerable position of women within the current economic climate and how the pandemic has increased the risk of further widening the gender gap within Australia.

It has been a long time since the World Economic Forum (WEF) hailed Australia as a leader in the global fight against gender inequality – 14 years, to be precise. Since achieving a rank of 15th in the WEF Gender Gap Report 2006 Australia has been sliding down this global ranking of gender equality. In 2020 we ranked 44th, well behind our traditional peers, such as New Zealand and the UK. Our performance is hindered by our poor representation of women in politics and our labour market structures, including high levels of sex-segregation by industry and occupation. It is hard to imagine Australia ever ranking in the top 20 again – especially given the Federal Government’s response to the COVID-19 crisis and their seeming lack of interest in the issues affecting women.

COVID-19 has exposed the structural inequalities within the Australian labour market and the vulnerability of millions of workers – especially women. Women make up nearly half the workforce (48%) but are over-represented (68%) in part-time work.1,2 Moreover, the majority (52%) of persons employed part time are casual roles.3 Job loss was particularly acute within female-dominated sectors, such as accommodation and food services, and administrative and support services (covering travel services, cleaning and employment services). When compared to August 2019, there were 356,600 fewer persons in employment at August 2020. One in four jobs lost (90,300 jobs) was from within the accommodation and food services sector alone.

Working hour losses have also been considerable. A year-on-year comparison (to August 2020) shows a drop in actual hours worked equivalent to 11,959 full-year, full-time, jobs. A staggering 61% of this drop in hours occurred amongst persons 15-34 years.4 It was also disproportionately concentrated lower to middle income jobs, such as technicians and trades workers and community and personal service workers (e.g. childcare workers) (Figure 1).

The underutilisation rate (which is the number of unemployed and the number under-employed people expressed as a share of the total labour force) has, as a result, significantly increased and, across all age groups, is higher for women than men. This is particularly the case in the youth (aged 15-24) labour market where one in three are under-utilised. This huge work deficit is concerning. Amongst other things it risks intensifying inequalities within and between labour market groups. 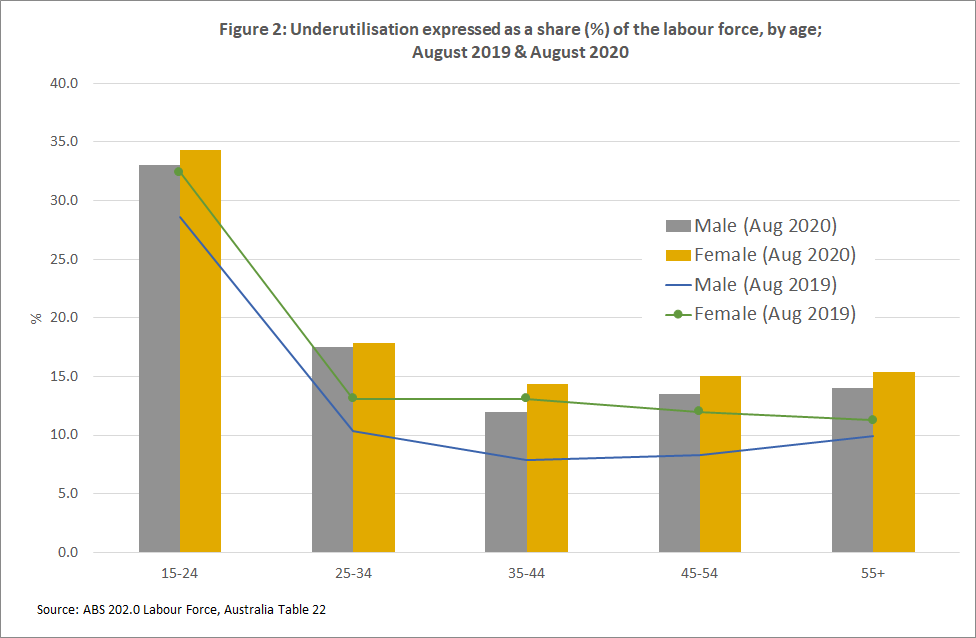 Of particular concern is the risk to gender equality. Australian women carry a disproportionate share of unpaid care-related work and survey data shows that 20% of women who want to start work or work more felt they were unable to do so because of care-related reasons. Of those who reported childcare as a care-related barrier, a quarter cited that the main barrier related to either childcare place availability or its cost.5

While advocates for gender equality urged the prioritising of childcare funding in the 2020 October budget, such an initiative did not make the cut. Indeed, only a paltry amount ($240m) of funding has been set aside to support women, notwithstanding the Government’s acknowledgement of the issues and challenges they face. As one commentator noted, more funding was set aside for single roads than for women’s economic security!

The recent Federal budget was an opportunity to address these barriers and to prevent a further slide in the WEF global gender equality rankings. Indeed, far from helping women, the message that women are being given is that men’s jobs are more important than women’s jobs. How else should we interpret the prioritising of monies for ‘shovel-ready projects’ and support to hire apprentices? The decisions no doubt reflect the ‘deep subconscious [masculine] bias’ within the Liberal party.6 It plays out in a multitude of ways, including the dearth of women within the Liberal party and the failure or unwillingness to specifically acknowledge and address the needs of women. Examples include the recent decision to cut government spending on Arts and Humanities degrees; i.e. degree programs where the majority of students (60% plus) are women.7 The change will see the government subsidy for these bachelor degrees fall from 47.8% to 7.1%.

From an economic perspective, women, on average, are doing it tough and there is no sense that it will get better. According to recent (2018) data from the Household, Income and Labour Dynamics in Australia (HILDA) survey, around 26% of tertiary educated, women in Australia have an outstanding student loan. The same share for men is 18%.8 Relatedly there is a large gap in the superannuation balances of men and women – prior to COVID-19 the superannuation gender gap stood at 59% for those aged 18-64.9 These two gender gaps primarily reflect the fact that women have lower life-time earnings as a result of shorter work histories (typically care-related) and, of course, the sizeable and persistent gender pay gap (around 14% in the full-time labour market). In other words, these gaps directly relate to gender differences in patterns and forms of labour market participation. They are also gaps that are likely to be exacerbated as a result of the COVID-19 crisis and the Federal Government’s gender-bias response.

Equally worrying is the high share of women (particularly older women) who are recipients of unemployment benefits, be it JobSeeker or Newstart as it was previously called (see Figure 3). At June 2019, and prior to COVID-19, 56% of women in receipt of JobSeeker were aged 45 years or more; the corresponding share for men was 45%. Proportionately more women than men are also longer-term (1 year or more) JobSeeker recipients. There are clear poverty risks associated with being a JobSeeker recipient, largely on account of the inadequate payment rate. Whilst this has been temporarily increased during the COVID-19 crisis, there is a real risk that it will revert to the original rate sometime next year. Modelling by researchers from the ANU suggests that, if this were to happen, an extra 740,000 Australians will be in poverty and it doesn’t take much to guess which gender will be particularly affected! 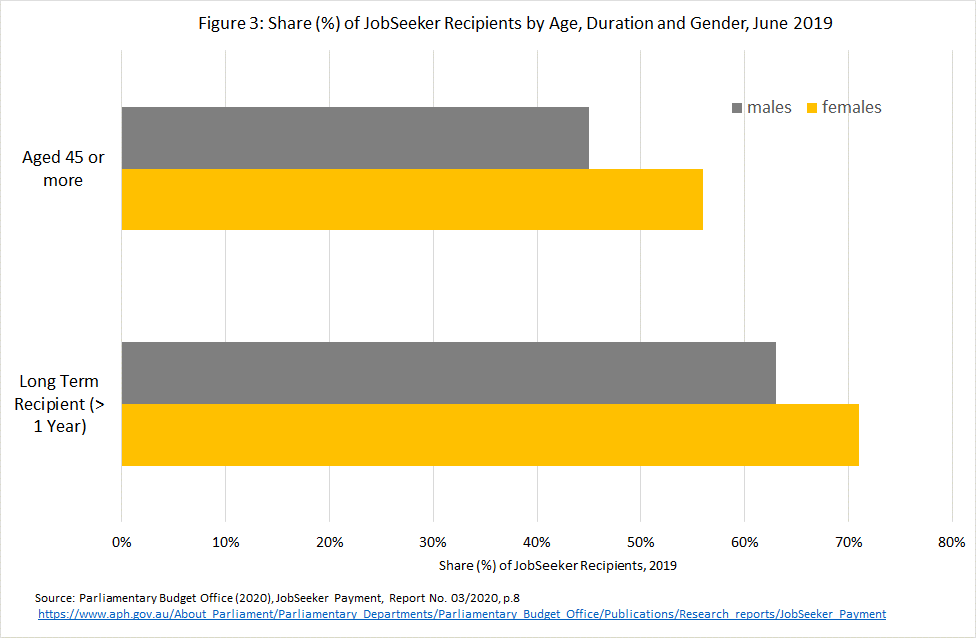 The overall conclusion is that, within Australia, the prospects for gender equality are very dim, particularly within the current political climate. There remain fundamental barriers to progress, including: institutional and social structures which reinforce traditional gender norms; precarious employment arrangements, particularly within female dominated sectors of the labour market; high levels of under-utilisation and attendant risks to career progression; and, of course, financial risks as a result of a retirement income system centred on occupational superannuation. If we continue to ignore the needs and wants of Australian women we do so at our peril. Closing gender gaps benefits not just women but the economy as a whole. 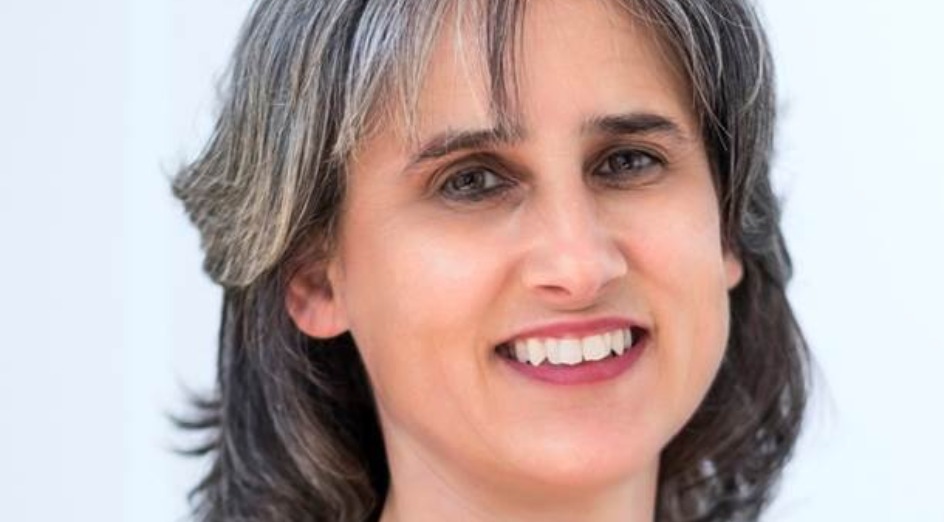 Professor Alison Preston is an applied micro-economist. She has a background in labour economics and industrial relations and a particular interest in gender equality. She is best known for her work on pay equity, working time arrangements and, more recently, financial literacy. She teaches in the areas of micro-economics and the economics of public policy.

7In 2017, of all domestic enrolments in Creative Arts degrees, 61.1% were female. The corresponding share for Society and Culture degrees was 64.9%. For further information see WEGA.

8Author's own calculations based on wave 18 of HILDA.