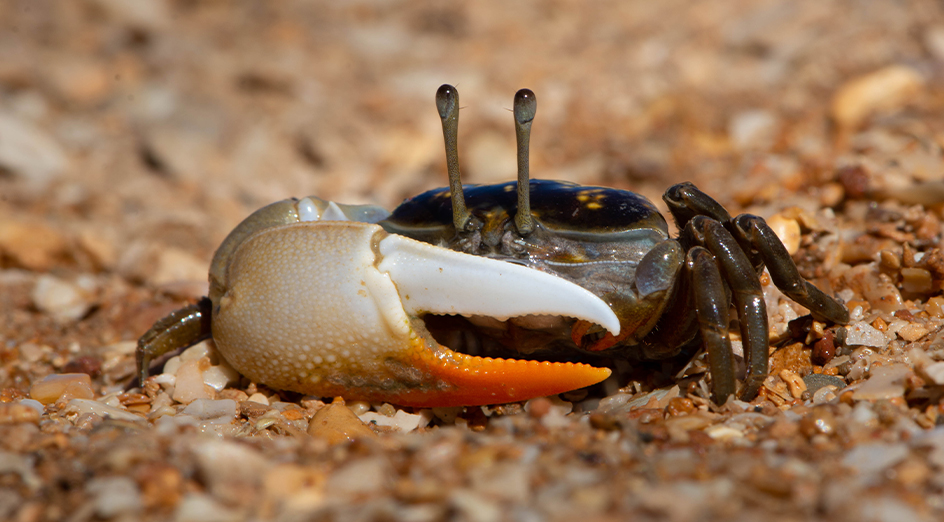 A new study by researchers from The University of Western Australia has found Fiddler crabs use selective attention as a survival strategy when confronted with multiple threats. The study has been published in the Journal of Experimental Biology.

UWA scientists set out to find out how the relatively simple animal, the Fiddler crab, responds when faced with two different threatening stimuli - a pair of black balls moving towards them, with one on a direct collision course and the second coming at an angle to produce an alarming near miss.

They were interested to find out if the crabs would identify and respond only to the threat they perceived to be the greatest or if they would respond to both stimuli at the same time.

Lead researcher Zahra Bagheri from UWA’s School of Biological Sciences and Oceans Institute said Fiddler crabs were an important food source for a variety of predators and relied solely on their vision to detect predators.

“When confronted with two threatening visual stimuli, the crabs appeared to completely ignore the less dangerous threat, focusing only on the ball that was on a direct collision course,” Dr Bagheri said.

“This shows that when the crabs are overloaded with information from approaching predators, they prioritise the greatest threat.”

Associate Professor Jan Hemmi, head of the Neuroecology Group at UWA said just like in humans, animals were faced with multiple stimuli on a daily basis where there was sometimes too much information for the brain to process, so they focused on escaping the most dangerous threat.

“This suggests the crabs are able to predict how close the dummy’s trajectory is to a collision course, which leads us to wonder what neurological computations are taking place to make that decision,” he said.

The researchers will run further neurological and behavioural experiments to understand what guides the selective attention and how the crabs assess the risk posed by predators and make escape decisions.