UWA's new chief Amit Chakma has a message of hope

This article was published in The Australian newspaper on July 14 and is reprinted with the newspaper’s permission.

Amid the gloom about the international student market, the University of Western Australia’s new vice-chancellor, Amit Chakma, has a message of hope.

“I’m very optimistic that sooner or later we’re going to have a (COVID-19) vaccine in place,” Chakma says. “And this problem will come to a solution.”

Until that long-term goal is fulfilled, his mission will be to build his institution’s capacity as a capable and caring host.

“We are going to prepare ourselves for a good international involvement. It is in our interest to make sure that these students who come to our campuses receive the best possible education,” he says.

This is a lesson he brings from his role as an architect of the international education strategy in his adopted home, Canada, where he settled after leaving his native Bangladesh as a young man to train as a chemical engineer.

"I want to take the next couple of years to make sure that we create an environment (so that) when students come here they are really going to be taken care of." 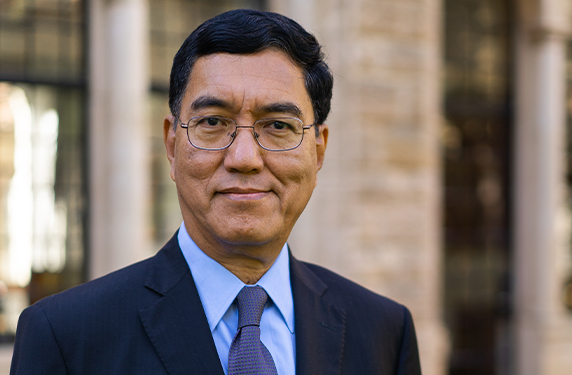 That means providing enough student residences. “I want to be able to say: ‘You don’t have to worry about finding accommodation.’ We’re not quite there yet.”

He also plans to orient UWA towards regional leadership — “if you draw a circle you capture Malaysia before you capture Sydney” — while still serving the state as the university’s founders directed.

Chakma, 61, was most recently the president of Ontario’s Western University for a decade. He is an unequivocal fan of Australia and of its pursuit of the international student market.

“Numbers don’t happen by accident,” he says. “Using those numbers and other means, Australian universities actually have become international.

He is also an admirer of Australian pragmatism, which underlies his view of research funding. He advocates recasting the discussions with government on this vexed topic. “Universities have to make the case about why research is important, and it is a struggle all the time in any jurisdiction.

“Rather than using the research ‘language’ as an approach to political leaders, what can we do to meet their needs, economic, social, governmental? If we started to speak that language (of) what can we do for our state, for our country, I think conversation becomes a lot easier,” Chakma says.

Funding is just as tough. “Nobody has found the right formula to fund universities: any time any jurisdiction tries to micromanage, the outcomes become unpredictable. Governments should establish a high-level policy framework. Public goals are very important. Then they should leave those in the hands of the (university) senates, the governing bodies, then good things will happen.”

Asked for a view on federal Education Minister Dan Tehan’s intervention to direct students to selected courses, he pleads a lack experience with the Australian system, where control resides with the commonwealth, unlike in Canada where it belongs to the provinces. “I’m quite a bit handicapped in offering any comments on whether the intervention will be effective or not,” he says.

Awards and achievements
Our community