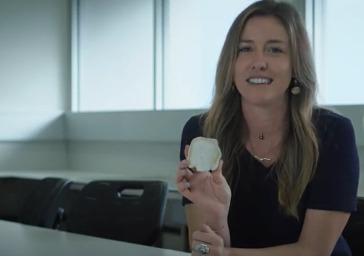 AMSA’s mission is to bring marine scientists together across disciplines, and the event showcased the breadth of marine research taking place across WA, with topics including marine pollution and climate change, behavioural studies from seabirds to marine mammals, and the use of modern technology in marine science.

Livestreamed via Zoom as well as in front of guest judges and viewers, the event was an opportunity for these young researchers to share their work and gain recognition for their excellent research.

“It was an honour to be selected to present my research with such an outstanding group of students from from WA,” says Taylor, whose work with the ARC Coral CoE group uses corals as an ocean temperature record to understand what our oceans were like thousands of years ago.

“I've continued studying corals in an academic setting here at UWA because we there is so much more we can gain from coral research. I'm so grateful to work on research that makes me more curious about our oceans with each day as we uncover more and more of its mysteries.”

Like many marine researchers, her interest in the ocean began in childhood, with her research as a natural progression of this early interest in conservation.

“It has always been clear to me, even as a child, that I would make ocean conservation and research my career. The ocean has just been my world ever since growing up in California.

“I found myself working on the Great Barrier Reef during the 2016 and 2017 mass coral bleaching events that led to the loss of about half of the GBR reef building corals. This lit a fire within my colleagues and me that led to us doing everything we could as citizens to protect the reef. I've continued studying corals in an academic setting here at UWA because we there is so much more we can gain from coral research.

“I'm so grateful to work on research that makes me more curious about our oceans with each day as we uncover more and more of its mysteries.”

For Jane Edgeloe, presenting at the AMSA Finals was a change to connect with the community and raise the profile of her research into Population genomics in Posidonia australis, a species of Australian seagrass.

“Being nominated as a finalist allowed me to expose my research to the broader community, raising awareness of some of the phenomena which sometimes go unnoticed within the marine environment. Seventy per cent of the world is covered by oceans, and within that space there is so much that has yet to be explored.

“I plan to transition into a PhD or a research career, building on the findings of my master's project. I see myself exploring seagrass further, closing knowledge gaps which presently exist, while at the same time establishing new knowledge gaps for future researchers to explore for decades to come,” says Jane.

Thomas Crutchett, a master’s student investigating plastic ingestion in commercially caught Western Australian sardines, is committed to research and hopes to take his work in ocean plastics even further through a PhD program.

“The marine plastics field is so fascinating to me, and we know so little about the potential implications, especially in Australia. I’ll be applying for a PhD in 2021 investigating the presence of plastics more broadly in WA.”

We congratulate all our students and wish them well in their careers to come.

Awards and achievements
Science and environment