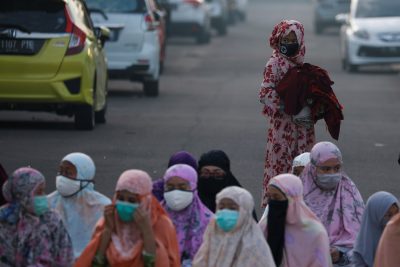 This article was originally published on EASTASIAFORUM on Thursday 9 July 2020, written by Dr Kelly Gerard.

Economic crises have disproportionately negative effects on women and these gendered impacts linger long after markets recover. This was observable during the 1997 Asian financial crisis and it is being experienced again with COVID-19 — but far more acutely.

Measures to stop the spread of the virus have decreased women’s opportunities for paid work. Women across Southeast Asia dominate sectors that are facing immediate losses of employment, work hours and pay — notably retail, textile and garment manufacturing, tourism and hospitality. In garment production, 150 of 600 factories in Myanmar have shut down with 58,000 workers ‘laid off’. A total of 200 out of 600 factories closed in Cambodia and 60,000 workers have been ‘suspended’.

Women are also overrepresented in the health sector, where they face a high risk of exposure along with abuse and stigma. Migrant domestic workers also face heightened insecurity over contracts and work arrangements, affecting their ability to support their networks through remittances. And with a significant (and growing) digital gender gap, women are at risk of being left behind in the rapid shift to tech-oriented work modalities.

COVID-19 has also increased household labour. Women across the region do a much greater share than men and it is these unpaid care economies that are again being relied upon to cushion ‘crisis shocks’. Women are taking on home-schooling, along with more cleaning and the challenge of provisioning the household under social distancing measures, reducing their capacity for paid work and increasing levels of stress and depletion.

Women are also at a heightened risk of domestic violence at a time when support services are being reduced. Before the crisis, more than 40 per cent of women in Southeast Asia experienced violence at the hands of their intimate partners. This number likely jumped during lockdowns — in Malaysia a domestic violence hotline reported a 57 per cent increase in calls when the country’s movement control order was in force. Previous pandemics reduced women’s health outcomes and there are concerns this will be repeated with COVID-19, with pressure on health services reducing access to pre- and post-natal health care and contraceptives.

The situation has not been aided by misogynistic comments from political leaders, such as the Indonesian Security Minister Mohammad Mahfud comparing COVID-19 to a wife. The Malaysian Ministry for Women, Family and Community Development also issued a series of online posters urging women during the lockdown to not nag their husbands, to dress up and wear makeup.

But the crisis also provides an opportunity to do things differently. Central to gendering policy responses is the reporting of sex, age and disability disaggregated data (SADDD) which shows who is affected and how, allowing for more targeted policy responses.

Stimulus packages and other recovery measures must meet the needs of those most acutely affected. It is central that affected women are brought into the policy conversation because a lack of female leadership and participation in responses will only further entrench women’s economic vulnerability. Discriminatory recovery responses are also likely to generate less growth and weaker recoveries.

In calibrating policy responses to the gendered impacts of the crisis, governments should not increase women’s already unequal burden. Women’s empowerment initiatives over the past decade have focused almost exclusively on women’s market inclusion — access to finance, markets, skills, training and business development services.

But these initiatives fail to address the structures that perpetuate gender inequalities over time, and so rarely lead to far-reaching change for those they affect. As feminist scholars have long argued, women entering labour markets may not tackle gender inequalities because this simply adds paid labour to their unpaid labour. Policy responses need to transform the drivers of gender inequalities — what UN Women has called ‘building back better’.

State economic planning across the region has long had an anti-welfarist orientation. But such a position looks less attractive with limited access to affordable healthcare in countries such as the United States leaving millions vulnerable. Now is the moment for expanding healthcare and childcare. There is a diversity of healthcare systems across the region, including Singapore’s globally renowned system.

While many countries have taken steps towards universal healthcare coverage, access still typically varies in line with broader inequalities. It is the coverage of the most marginalised — such as undocumented migrant workers — that is crucial for public health, so patching up coverage gaps is critical. Childcare provisions can similarly be expanded, even through small steps such as leave entitlements for parents when their child’s school is closed. In Japan, for example, parents can access such leave with employers subsidised by up to 8330 yen (US$78) per person per day.

For men fortunate enough to be able to work from home during lockdowns, there is now an opportunity to observe and get involved in household tasks, covering not only cooking and cleaning but also managing the mental load required for a household to function.

Advertising campaigns, such as the #KitaMulaiSekarang and #LetsStartNow campaign, can help drive reform, as can support networks for men who make this shift. Businesses can also facilitate change — and develop their gender credentials — through flexible work arrangements, onsite childcare and paternity leave.

Crisis responses will determine how the region tracks not only in terms of minimising mortalities and recovering economically but in building regenerative communities, and not losing the gender equality gains that have been won.

Kelly Gerard is a Senior Lecturer in Political Science and International Relations at The University of Western Australia.

This article is part of an EAF special feature series on the novel coronavirus crisis and its impact.