It was the trek that shook up the world of science, proving Einstein’s theory of relativity and changing our understanding of space, time and gravity – and 100 years on The University of Western Australia is set to celebrate the Wallal Eclipse Expedition with a fortnight long calendar of events and activities.

In September 1922, Wallal — meaning ‘sweet water’ after a local Aboriginal fresh water source and located next to Eighty Mile Beach on the lands of the Nyangumarta people of Western Australia’s Kimberley region — was deemed the most ideal place on Earth to view a total eclipse of the sun and prove Albert Einstein’s Theory of General Relativity.

Instigated by UWA Professor Alexander Ross, an expedition including astronomers from the United States, Canada, New Zealand, India and Britain travelled to Wallal Downs Station with photographers, naval staff and almost 100 Nyungumarta people, to prove one of the most fundamental truths of the universe. 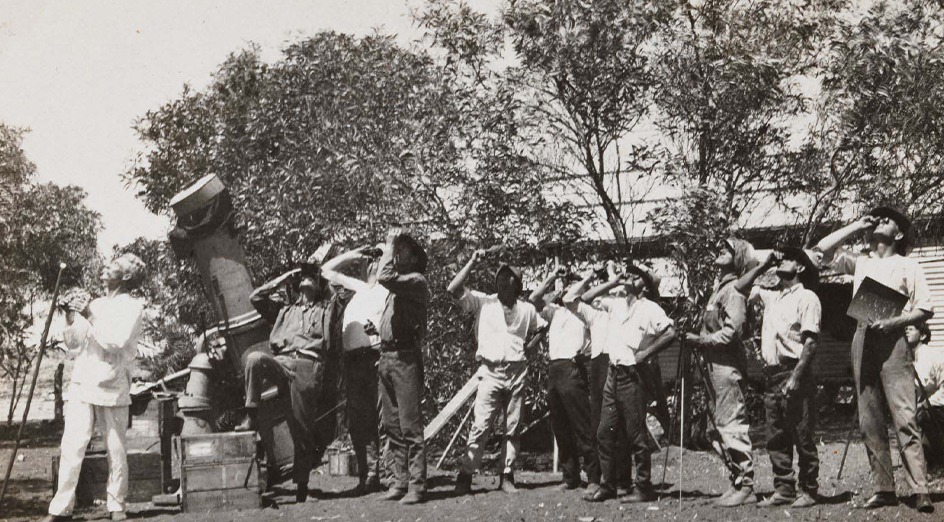 Image: (Credit - State Library of Western Australia_slwa_b4792891) Donkey team hauling equipment or supplies up the beach from a schooner - probably the Gwendoline - during the 1922 Solar Eclipse Expedition, Wallal.

To be hosted in the Undercroft of UWA’s iconic Winthrop Hall, scientists, a renowned WA artist and educators have created an exhibition that starts in Wallal and finishes with astonishing discoveries of black holes across the universe.

The two-week long celebrations will include the story of the Wallal Expedition in words, pictures and a 10-minute movie, as well as Drawing in Space and the Germ Series, a stunning expedition of science-inspired sculptures by renowned artist Mark Grey-Smith.

There will be interactive activities allowing students to discover gravity and Einstein’s universe, suitable for all ages, and the opportunity to take a tour of a black hole in virtual reality and have a first look at the Royal Australian Mint’s Wallal Centenary commemorative coin.

Also planned, family-friendly public lectures including from two of the world’s top scientists and powerhouses of physics, internationally renowned Regents’ Professor Paul Davies AM and Professor Tamara Davis AM, who’ll cover everything from the most profound questions about the universe to years of ground-breaking discoveries of black holes with gravitational wave detectors.

There will be free educational talks and workshops customised for students in years 3-12, an information exhibition about teaching Einstein Physics in schools and the chance to pick up a signed copy of the new book Uncovering Einstein’s New Universe by David Blair, Ron Burman and Paul Davies.

The book, designed to be easily understood for students, tells the whole story of the discovery of Einstein’s universe from curved space in 1922 to the labyrinthine search for gravitational waves and the astonishing black holes discovered since 2015.

And who can resist the thought of snapping a black hole selfie! For all the details of the event program which runs from September 20 to October 2 and to register for talks and workshops, see the website.

Credit for photograph at top of page: (State Library of Western Australia_slwa_b4792891) Donkey team hauling equipment or supplies up the beach from a schooner - probably the Gwendoline - during the 1922 Solar Eclipse Expedition, Wallal.

Our community
Our people
Research
Science and environment