Deeper waters at remote Ashmore Reef off the Western Australian coast could be acting as a refuge for sea snake species not seen in shallow waters for more than a decade, new research led by the Australian Institute for Marine Science indicates.

The critically endangered short-nosed sea snake was among seven species observed in the deeper mesophotic waters (between 50 to 150 metres below the surface) at the reef in video surveys undertaken with scientists from the Western Australian Museum, The University of Western Australia and Stantec Australia.

Some of the surveys were carried out during a deep sea expedition aboard the Schmidt Ocean Institute Research Vessel Falkor in 2021. 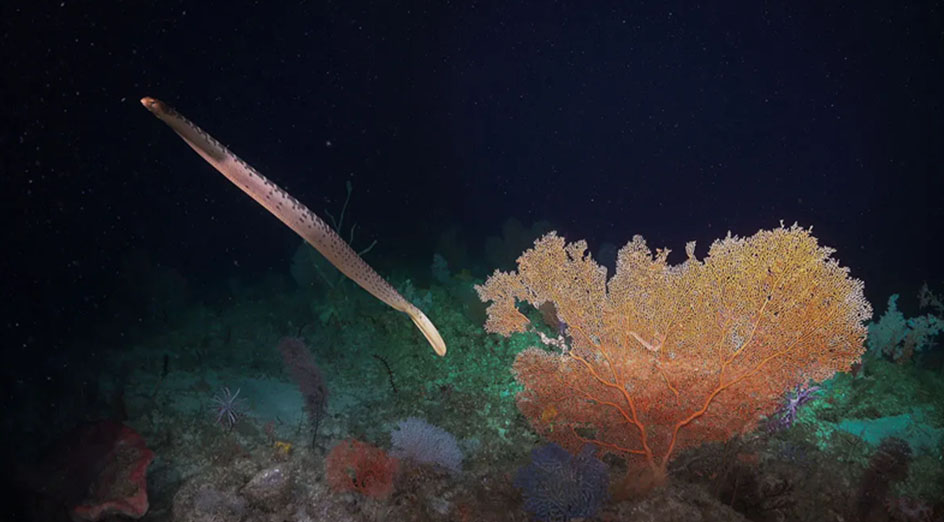 The shallow waters at Ashmore Reef were once a global hotspot for a diverse range of sea snakes, but five of the species (dubois, spotted, king’s, western turtle headed and the short-nosed sea snake) had not been reported in those depths for a decade prior to the survey.

Despite these positive findings, the abundance of the sea snakes observed in the deeper habitats were well below those recorded in earlier surveys in shallow water.

“It shows that we should be looking deeper than the first 15m of the water column in Ashmore Reef and at other coral reefs for sea snakes and other species.

“We compared data from baited videos collected in 2004 and 2016, which suggests that the recovery of shark species and other sea snake predators may be partly responsible for the decline in numbers of sea snakes in shallow waters at Ashmore Reef, although more data is needed to confirm this theory. The recovery of these predators is likely due to increased fisheries enforcement of the Ashmore Reef Marine Park,” Dr Speed said.

"There is still so much to discover, as we move past the shallow reefs into deeper waters beyond," said Dr Wilson.

"As well as these important observations on sea snakes, we also saw so many other organisms that we know little about. Expeditions like these are just the beginning of so many different discoveries."

Baited remote underwater videos and a remotely operated vehicle were used to collect 288 hours of video footage in 2004, 2016 and 2021 for the study. Eighty sea snakes from seven different species were observed in the footage.

Our community
Our people
Research
Science and environment