Professor John Bloomfield was the founding academic for physical education and sport science at The University of Western Australia and a pioneer in elite sports performance in Australia.

“John led the establishment of physical education and sport science at UWA and across the country. His commitment to the field, academically and in practice over the subsequent decades, has left a legacy that all Australians experience through physical education classes at School and our proud sporting success."

After growing up in Kiama in New South Wales he became a successful surf life saver, representing Australia several times in the 1950’s. He left Australia in 1960 on a Fulbright Scholarship to undertake post graduate studies at the University of Oregon and was appointed to UWA in 1968 to head up a new physical education program.

In 1974, he became Australia’s first professor to specialise in sport and exercise science when he was appointed the Foundation Professor in the then Department of Human Movement and helped many universities across the country establish sports science and physical education programs.

In 1980, Professor Bloomfield was appointed deputy chairman of the newly established Australian Institute of Sport and in 1985 replaced Kevan Gosper as chairman, a position he held until 1989.

While chairman, he was involved in managing the merger of the AIS with the Australian Sports Commission). He was co-chairman during the merger period — 1987 and 1989 and in 2003 — and authored the book Australia’s Sporting Success: The Inside Story, the first publication to document the development of high-performance sport in Australia. 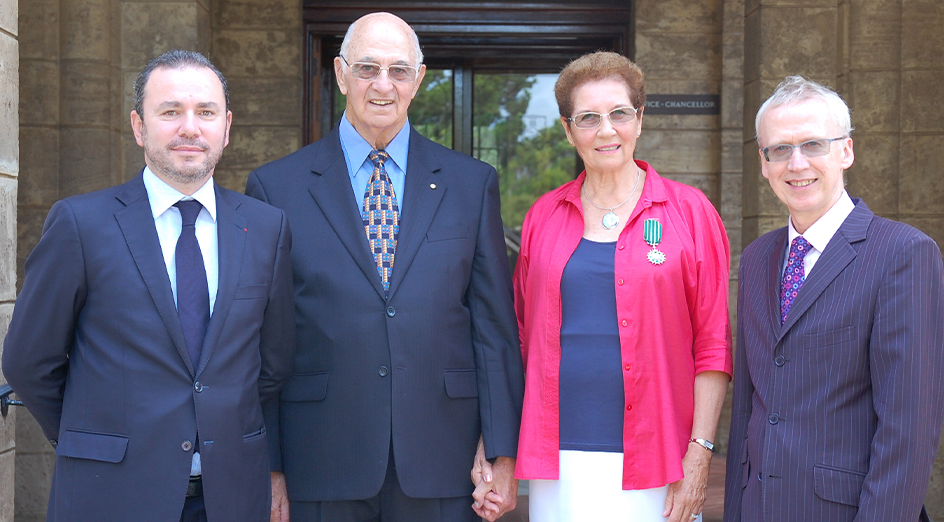 Image: Professor John Bloomfield (second from left) at UWA in 2015 with then French Ambassador Christophe Lecourtier (left), wife Noelene and then UWA Vice-Chancellor Professor Paul Johnson (right) as Noelene, a UWA Honorary Research Fellow was awarded the Chevalier dans L'Ordre des Arts et Lettres (Knight of the Order of Arts and Letters) by the French Government.

Head of the School of Human Sciences at UWA, Professor Michael Rosenberg, said following a successful academic career and with more than 100 peer review publications and many significant contributions to the University and field, Professor Bloomfield was awarded a UWA Emeritus Professorship in 1997.

“John led the establishment of physical education and sport science at UWA and across the country,” Professor Rosenberg said.

“His commitment to the field, academically and in practice over the subsequent decades, has left a legacy that all Australians experience through physical education classes at School and our proud sporting success.

“John’s work paved the way for many UWA academics and graduates to make their own significant contributions to the field and community.

“In 2008, the main lecture theatre in the Human Movement building was named in his honour, with his portrait unveiled in 2018.

“While John’s health had been failing over the past year, the University and Sport Science remained a central part of his life since he joined in 1968, and on behalf of the School and the University, I extend to Noelene and the entire Bloomfield family our deepest sympathies.

“When appropriate, we will join them in celebrating Professor Bloomfield’s incredible life, career and the legacy he leaves his family, the School, UWA and the sporting and broader community.”