A new study by an international team of scientists, including Associate Professor Talitha Santini from The University of Western Australia, has given new insight into the origins of the world-heritage listed Fraser Island and the formation of Australia’s iconic Great Barrier Reef.

“It highlights the value of K’Gari and the Cooloola Sand Mass as a globally significant archive of climate change information and coastal geomorphological development."

Known to its traditional owners as K’Gari, Fraser island is the largest sand island in the world, stretching over 123 kilometres in length and 22 kilometres at its widest point.

Associate Professor Santini said the research, published in Nature Geoscience, found the sand island dates to around 800,000 years old and its formation was tied to a major change in Earth’s climate during the Middle Pleistocene Transition, around a million years ago.

“During this time sea-level changes associated with the growth and decline of ice sheets changed from around 75m per glacial cycle to about 120m per cycle,” Associate Professor Santini said.

“On the east Australian coast, north of Brisbane, the increased variability in sea level triggered large volumes of sand to be moved from offshore sediment stores and onto the coast, creating massive sand dune fields that became the Cooloola Sand Mass and K’gari.

“The formation of K’gari then prevented sand from being transported north into areas that now form part of the Great Barrier Reef, which provided the clear waters needed for coral growth and set the conditions for the formation of the reef.” 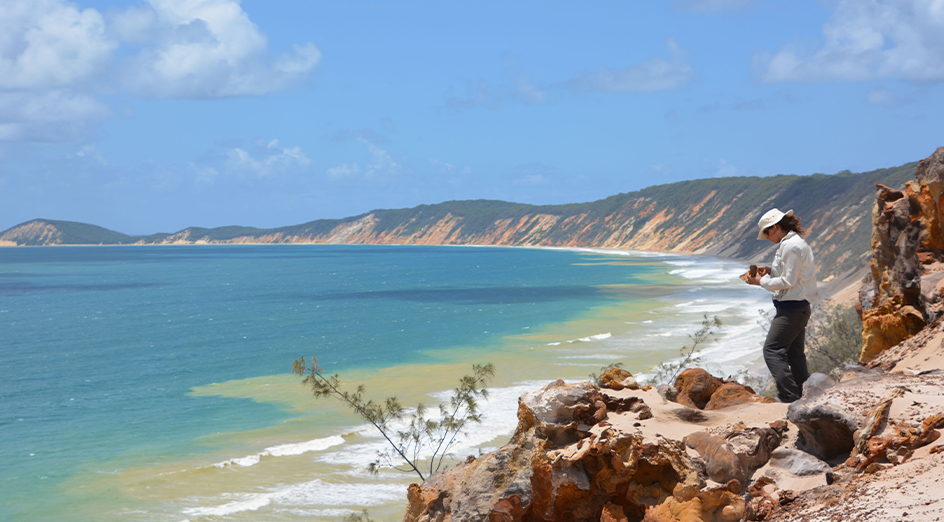 Image: Associate Professor Santini inspecting sand samples along Rainbow Beach, part of the Cooloola Sand Mass study site. The unusual bright orange, yellow, brown and red sand colours that give Rainbow Beach its name, and the rock-like structure of the sands, are formed through deep weathering of coastal sands over millenia.

As well as resolving a longstanding puzzle around the Great Barrier Reef’s origin, Associate Professor Santini said the study provided useful information for predicting and managing coastlines and reefs in response to future climate change.

“It highlights the value of K’Gari and the Cooloola Sand Mass as a globally significant archive of climate change information and coastal geomorphological development,” she said.

“Future work will examine similar coastlines in South Africa and Brazil to better understand the global evolution of coastal dunefields during the Middle Pleistocene Transition and in response to future climate change.”

The research, involving scientists from Australia, New Zealand and the USA, was funded by an Australian Research Council Discovery Grant.