A molecular microbiologist at The University of Western Australia’s School of Biological Sciences has won a prestigious 2022 Science and Innovation Award that will help fund development of a spray to protect crops from frost damage.

Jaco Zandberg from UWA’s Crop Genomics Group was recently part of a team that identified an ‘ice-nucleating’ bacteria linked to severe frost damage in grain crops, a problem that costs Australian farmers an estimated $400 million each year. 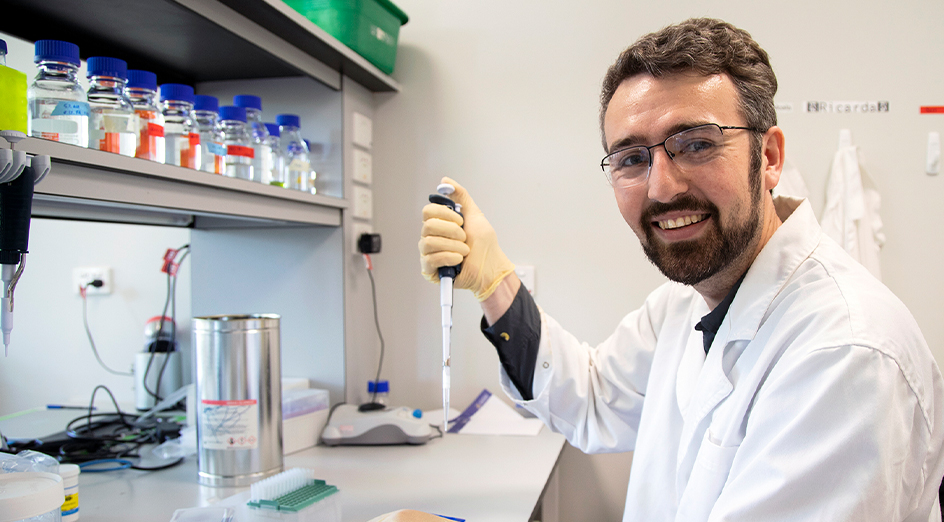 Image: PhD Candidate Jaco Zandberg at work in the lab.

The bacteria – known as Pseudomonas – produces proteins that raise the temperature at which water freezes in the environment. It means frost damage can occur at temperatures as high as -2°C, rather than the -8°C to -10°C usually needed in the field.

The PhD candidate was one of 12 recipients in the Federal Government’s Department of Agriculture, Water and the Environment 2022 Science and Innovation Awards.

Mr Zandberg was awarded the Young People in Agriculture, Fisheries and Forestry prize, designed to recognise big ideas for agriculture from young rural innovators, which comes with $22,000 towards making his vision a reality.

He said the idea for his project came jointly from his partner Samantha Harvie, a molecular biologist in the ARC Centre of Excellence for Plant Energy Biology at the UWA School of Molecular Sciences, who just finished her honours studying ‘vesicles’ produced by bacteria.

“Vesicles are nanostructures that bud out of and into bacterial cell membranes and they carry a specific set of molecules. The internal molecular cargo can be programmed to a certain extent,” Mr Zandberg said.

“My proof-of-concept will explore whether these can be used to carry interference molecules that will temporarily shut down production of ice-nucleating proteins.

“The vesicles we will produce will be 100 per cent natural, non-toxic and non-GMO. They’re essentially an easy-to-use, naturally forming structures that can capture the interference molecules”

Ultimately, Mr Zandberg and Ms Harvie hope to use their novel technology to develop an easy-to-use spray that can be applied by farmers when a frost event is forecast, to suppress the ice nucleating activity.

Image: Partners in research and in life, Jaco Zandberg and Samantha Harvie.

“The bacteria are still an essential part of the plants’ microbiome and so it’s important not to create a permanent off-switch. The technology is just meant to suppress the activity when the farmer knows a frost event is coming, then it goes back to normal and functionality is restored,” Mr Zandberg said.

“The spray will be designed specifically for growers and farmers to use easily and without the need for specialised equipment and so the perfect addition to their frost management toolkits, reducing the devastating and costly damage caused by frost events.”

Having grown up on Lucerne farms in rural South Africa, Mr Zandberg said he’s “committed to a career in agricultural research, particularly with looming climate changes on the horizon”.