UWA and France on the hunt for exploding stars

The University of Western Australia and the French Government are working together with industry and researchers to improve monitoring of space for exploding stars billions of light years away.

UWA is working with the Centre National d’Etudes Spatiales, the French Government’s space agency, to install a network of receiver stations across northern Australia. The stations will receive alerts from the Space Variable Objects Monitor satellite in high orbit above Earth. The satellite is sensitive to gamma ray bursts which signal massive stars exploding.

Within seconds an alert will be sent to telescopes, including the UWA Zadko Telescope, which will capture the rare events in the sky above northern Australia. The satellite stations across Australia fill a global blind spot, allowing scientists to access a unique part of the sky.

French researchers will use the data to understand the connection between exploding stars and gamma ray bursts. 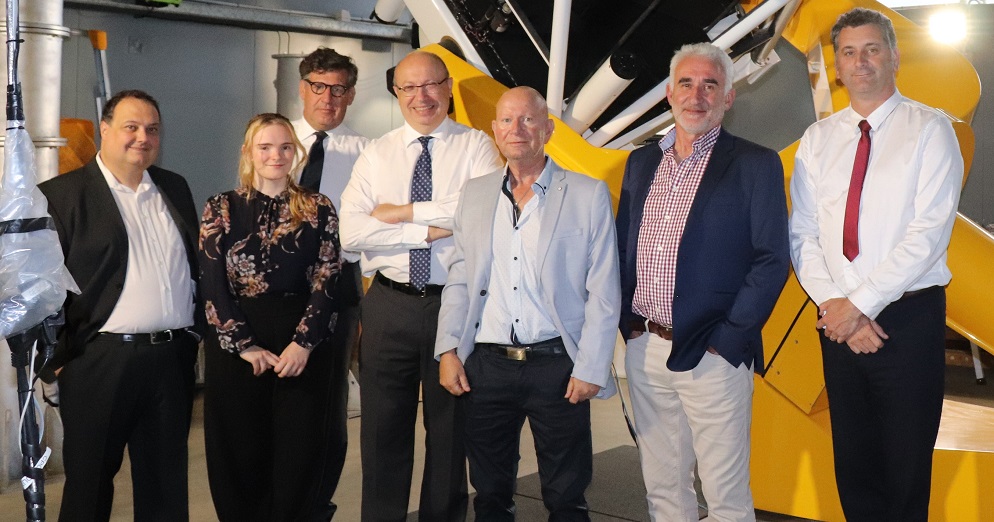 Associate Professor David Coward from the Centre of Excellence for Gravitational Wave Discovery at UWA said expanding connections with industry and researchers would strengthen scientific collaboration between Australia and France.

“Because most of these events are billions of light years away, we are able to study the Universe billions of years before Earth was even formed,” Professor Coward said.

The French Ambassador to Australia, His Excellency Jean-Pierre Thebault, said the delegation was pleased to support UWA in expanding satellite receiver stations across Australia.

OzGrav scientist Dr Bruce Gendre, who is leading the UWA team to install the satellite receivers, said the Zadko Telescope Observatory team was working with the French Government to find optimal locations for the receivers.

“We are in a race against time to be ready to start receiving alerts from the new receivers later this year,” Dr Gendre said.

The collaboration will provide an opportunity for school students across Australia to participate in the research. The UWA team will select projects that have the greatest impact, to teach students about STEM and how the Universe formed and evolved.

The Zadko Observatory team is supported by the UWA’s School of Physics, Mathematics and Computing and Office of Research, and the Australian Research Council Centre of Excellence for Gravitational Wave Discovery (OzGrav). The team is also a part of the UWA International Space Centre.