This article by Dr Bruno Buzatto, from the School of Biological Sciences at the University of Western Australia, was originally published in The Conversation on December 17.

Millipedes were the first land animals, and today we know of more than 13,000 species. There are likely thousands more species of the many-legged invertebrates awaiting discovery and formal scientific description.

The name “millipede” comes from the Latin for “thousand feet”, but until now no known species had more than 750 legs. However, my colleagues and I recently found a new champion.

The eyeless, subterranean Eumillipes persephone, discovered 60 metres underground near the south coast of Western Australia, has up to 1,306 legs, making it the first “true millipede” and the leggiest animal on Earth.

In Australia, most species in some groups of invertebrates are still undescribed. Many could even become extinct before we know about them.

Part of the reason is that life is everywhere, even where we least expect it. You could be excused for thinking remote areas of Western Australia such as the Pilbara and the Goldfields, where the land is arid and harsh, are not home to too many species.

But the reality is very different. An enormously diverse array of poorly known animals live underground, inhabiting cavities and fractures in the rock several metres below the surface.

One way to find out about these creatures is to place “troglofauna traps” far below the surface. E. persephone was found in one of these traps, which had spent two months 60m underground in a mining exploration bore in the Goldfields.

At the time I was working for a company called Bennelongia Environmental Consultants, which had been hired by the mining company to survey the animals in the area. I was lucky enough to be in the laboratory on the day the leggiest animal on Earth was first seen.

Our senior taxonomist, Jane McRae, showed me these incredibly elongated millipedes, less than a millimetre wide and almost 10 centimetres long. She pointed out how their triangular faces placed them in the family Siphonotidae, comprised of sucking millipedes from the order Polyzoniida. 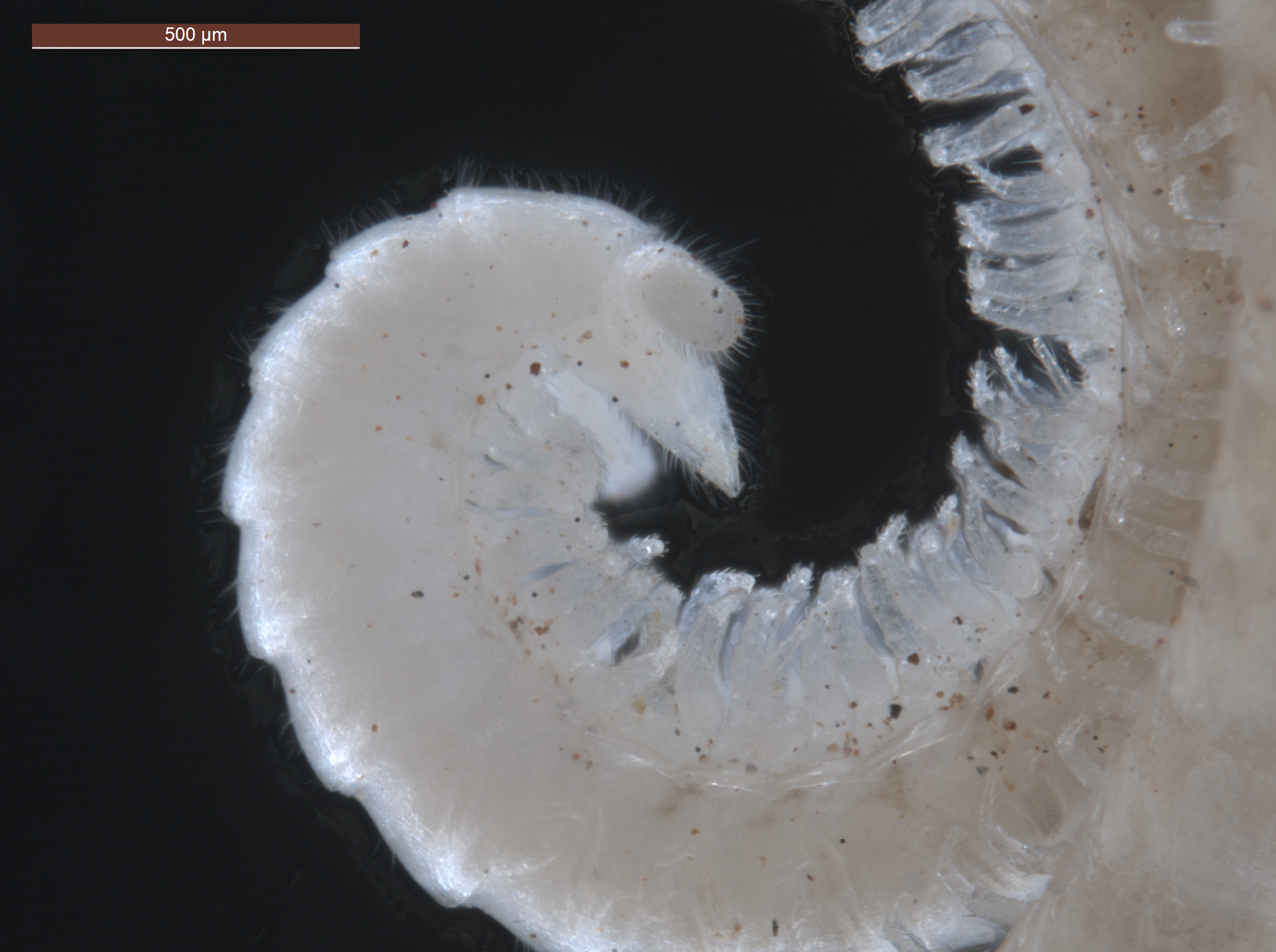 Image: Face of the Siphonophorida found in the deep trap.

Their long, thin and pale bodies, with hundreds of legs, reminded me of a paper I had read years earlier, which redescribed the leggiest millipede in the world, the Californian Illacme plenipes, bearing 750 legs. Back in 2007, while teaching zoology at Campinas State University in Brazil, I used that paper to explain to students how no millipede species in the world really had 1,000 legs.

Often, popular names are scientifically inaccurate, but in front of me I had an animal that stood a chance of finally making the name millipede biologically correct.

A true millipede at last

I suggested to Jane that our new specimens might be more consistent with I. plenipes, which belongs to another order of millipedes, the Siphonophorida. We consulted Mark Harvey from the WA Museum, and together were surprised to realise Siphonophorida are very rare in Australia: there are only three known species, all found on the east coast.

Next, I contacted Paul Marek at Virginia Tech in the United States, a millipede expert and lead author of that paper about the 750-legged I. plenipes. He was excited to receive the specimens a few weeks later.

This new species turned out to have up to 1,306 legs, making it the first true millipede. Paul named it Eumillipes persephone, in reference to its “true 1,000 legs” nature, and to Persephone, the goddess of the underworld in Greek mythology who was taken from the surface by Hades.

Why so many legs?

E. persephone was most likely driven to its underground life as the landscape above became hotter and drier over millions of years. We eventually discovered Jane was right about the nature of E. persephone: it is in fact a member of the Siphonotidae family, only distantly related to I. plenipes, and is therefore the only species in the whole order Polyzoniida with no eyes.

We classify any millipede with more than 180 body segments as “super-elongated”. E. persephone has 330.

With a genetic analysis, we found that super-elongation has evolved repeatedly in millipedes, and it might be an adaptation to living underground.

The large number of legs likely provides enhanced traction and power to push their bodies through small gaps and fractures in the soil. But this is just a hypothesis at this stage, and we have no direct evidence that having more legs is an adaptation to subterranean life.

Finding this incredible species, which represents a unique branch of the millipede tree of life, is a small first step towards the conservation of subterranean biodiversity in arid landscapes.

A large proportion of the species of arid Australia are undescribed. For subterranean fauna, this may be more than 90 per cent. Not knowing these animals exist makes it impossible to assess their conservation status.

Biodiversity surveys, and especially the taxonomy that supports them, are incredibly important. Taxonomists such as Jane, Paul and Mark are the unsung heroes of conservation.