UWA researchers discover the cause of devastating crop disease

Researchers at The University of Western Australia have identified the cause of the devastating faba bean gall disease for the first time, a disease that causes significant destruction of bean crops in Ethiopia and China.

When the disease arrived in Ethiopia in 2012, surveys of a region showed that 50 to 100 per cent of crops quickly become infected, followed by losses up to 100 per cent.

Faba bean is of critical importance for food security in Ethiopia, and faba bean gall disease is especially devastating for this East African community.

It is also known to attack field peas and clover growing nearby, and poses a serious international biosecurity risk for its potential to be accidentally introduced into other countries, including Australia.

Australia is the world’s leading exporter of faba bean, producing up to 500 thousand tonnes annually and supplying one-third of faba bean traded internationally.

The grain legume is mainly grown in the cropping systems of South Australia, Victoria, New South Wales and Western Australia.

In world-first findings published in the international journal Plant Pathology, Professor Martin Barbetti and Research Fellow Dr Mingpei You from the UWA School of Agriculture and Environment and The UWA Institute of Agriculture have definitively proven that the pathogen Physoderma viciae is the cause of faba bean gall disease. For decades, researchers around the world had tried and failed to identify the exact cause of this disease.

Molecular sequencing attempts in China and Ethiopia were unsuccessful, even when samples from Ethiopia were sent to prestigious labs such as CABI in the UK in 2012 and Wageningen Plant Research International in the Netherlands in 2016.

Professor Barbetti said he believed others had not understood the biology of the pathogen, so they were unable to identify the cause.

“It took the UWA researchers more than two years to design, make and test many different primers in the lab to finally identify the pathogen behind faba bean gall disease,” Professor Barbetti said.

“We now understand critical new elements of the pathogen life cycle for the first time.”

For more than a century, the control and management of faba bean gall disease was based on the wrong pathogen, Olpidium viciae, which is different in terms of its biology, infection and spread strategies.

The first appearance of symptoms of faba bean gall disease occurs when areas of the upper leaf surface produce masses of water-splashed zoospores - a spore capable of swimming.

These are located in specialised sunken-well structures on leaves that the pathogen cleverly tricks the plant into producing for the sole benefit of the pathogen. 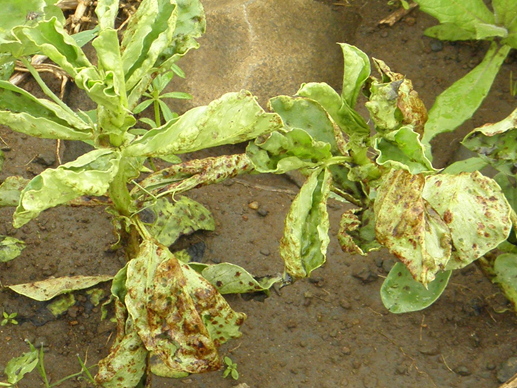 Professor Barbetti said management strategies could now be aligned with the nature and behaviour of the pathogen.

“Armed with the knowledge that the disease is caused by a pathogen that spreads by rain splash, we can now predict when the zoospores will be released and best highlight timings for chemical spray applications to reduce reinfection cycles.”