Three mathematicians from The University of Western Australia have been awarded a prestigious national prize for solving a problem that has perplexed researchers for more than 30 years.

Professor Michael Giudici, Professor Gordon Royle and Associate Professor John Bamberg from UWA’s School of Mathematics and Statistics received the Gavin Brown Prize for their article Every flock generalized quadrangle has a hemisystem, published in the Bulletin of the London Mathematical Society. 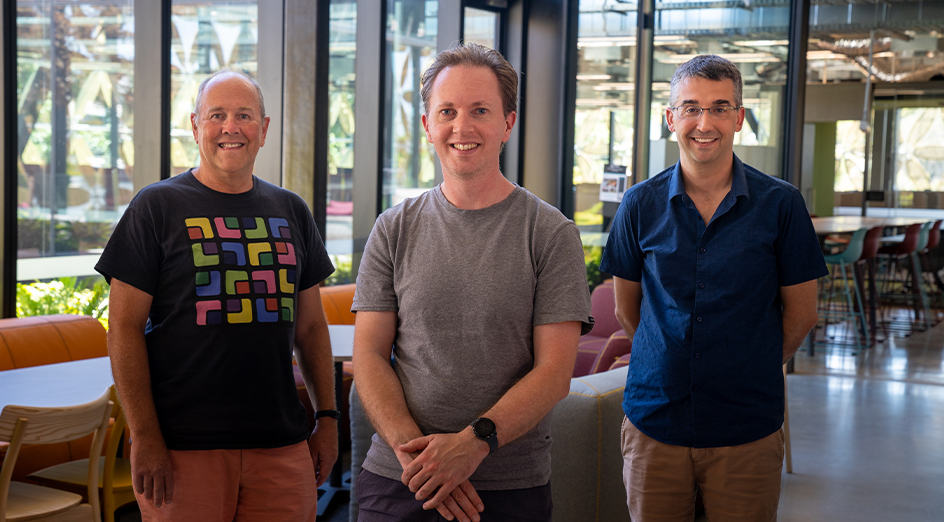 The prize, awarded annually by the Australian Mathematical Society, recognises an outstanding and innovative piece of original research in the field of mathematical sciences.

"Finite mathematics underpin much of the technology and systems that most people use daily, from telecommunications and mobile phones to cryptography and online banking."

Professor Giudici said the group – which first began collaborating after receiving an ARC Discovery Grant in 2009 – was delighted to receive the Gavin Brown Prize.

“We feel honoured for our paper to be recognised amongst other high calibre research from previous winners,” Professor Giudici said.

Their work focuses on finite geometry – which is the study of geometric objects that have a limited number of points – and is closely related to finite group theory, the study of symmetry.

The ground-breaking paper proved the existence of a mathematical concept called hemisystems, after several decades of discussion among the mathematical science community.

Assessors from the Australia Mathematical Society judged the paper to be highly influential in the field of finite geometry, using a clever mix of geometric and algebraic techniques to tackle a question no one had been able to answer.

Professor Royle, who specialises in graph theory, said finite mathematics was not usually studied with applications in mind, but the widespread growth of computers and networks had relied heavily on these concepts.

“Finite mathematics underpin much of the technology and systems that most people use daily, from telecommunications and mobile phones to cryptography and online banking,” Professor Royle said.

“Finite mathematics, including finite geometry, is central to the mathematics of experimental design which deals with ways to efficiently allocate treatments to subjects in medical or agricultural experiments,” Associate Professor Bamberg said.

More information is available on the Australian Mathematical Society website.

Awards and achievements
Our people
Science and environment