The large O-Tube, which is a closed-loop flume with a base of seabed soil. The cross-section of the flume is 1 m wide by 1 m tall, and the working section is 17 m long. The O-Tube motor is able to generate currents in excess of 3 m/s and wave velocities of up to 2.5 m/s (across periods of 5-15 s). The facility also includes a smaller O-Tube (approximately 5 times smaller in each dimension) which is used for complementary experiments.

Experiments in the O-Tubes provide observations of seabed behaviour during cyclones which could not otherwise be made, as well as fundamental insight into sediment transport and on the loading of infrastructure such as pipelines. For example, the O-Tube experiments allow direct measurement of the forces applied to a pipeline by cyclonic waves with up to 1 in 1000 year return periods. Meanwhile, the changing topography of the seabed is captured by digital imaging methods including binocular infra-red scanning.

A key learning from applying the UWA-authored STABLEpipe design guideline on projects is that identifying and predicting scour initiation points along the pipeline are critical for kick-starting the scour process, leading ultimately to pipeline lowering and improved stability. For concrete coated trunklines, field joints present natural locations for the onset of scour given the locally reduced diameter.

Understanding and being able to predict the as-laid embedment condition and subsequent changes under ambient / non-extreme conditions is therefore of great interest.

This project is undertaking experiments to assess how field joints affect the changes in pipe embedment resulting from scour which occurs during ambient conditions; this understanding will then be used to assess the capacity of these joints to act as initiation points in subsequent storms. Sediment samples from Port Phillip Bay, Victoria were subjected to steady current velocity erosion testing and wave velocity erosion testing. The tests were conducted inside the small O-tube which, is capable of replicating steady state flow and rectilinear flow, similar to that experienced close to the bed under surface waves.

Applying incremental increases in flow velocity, we were able to determine their erosion resistance. Some phenomena such as cohesive bonding and mass erosion were observed. 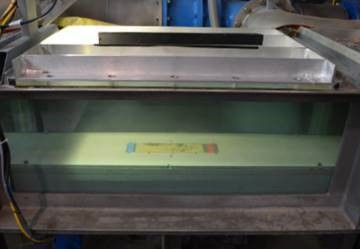